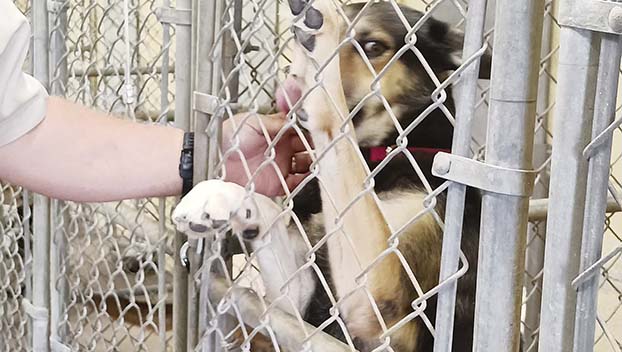 The City of West Orange shelter is built to house 10 dogs, and officials do everything they can to avoid animal euthanizations. (Sierra Kondos/Special to The Leader)

The New Year can be tough on local pets following a traditionally rough holiday season — there are strangers around, owners do quite a bit of traveling and the season tends to inspire some to surrender their animal.

“In all honesty, I can’t ever remember having such an influx of dogs like we have right now,” says Traci James, of Traci’s Texas Tails. “In the 10 years I’ve been doing this, it just keeps getting worse and worse.”

James volunteers to help care for the dogs at the Pinehurst Animal Shelter, which has a seven-dog capacity and does not accept cats.

“Everyone blames everything on COVID, but it sure affected rescues, as well,” James said.

MORE COVERAGE: What’s needed and how to donate to Orange County animal shelters.

Andy Borel, Animal Control Officer for the City of Orange agrees, saying some people took in companion animals at the beginning of the pandemic while in lockdown but changed their minds once things began to feel more normal.

The Orange shelter has 20 kennels for dogs and 12 cat kennels.

“The entire month of November I had running total of 40 plus at my shelter just about every day waiting on someone to adopt them,” Borel says.

With only 20 kennels, that meant doubling up while also following state guidelines of putting dogs that are the same size together and same sex.

Most in rescue are accustomed to hearing the same excuses over and over as to why someone wants to surrender their animal.

“They can’t bring them to the summer house, there’s wild animals, all these excuses to take an animal off their hands,” Borel says.

Many shelters see a large number of surrenders after the new year.

“A lot of times after Christmas the influx is due to people getting their kids puppies for Christmas and not doing their homework,” James says. “I have heard every excuse.”

That lack of research on some breeds sometimes results in the surrendering of an animal.

“They get [a dog] and find out that Shepherds and Huskies are too much to handle,” says Debbie Schlicher, Adoption Coordinator for West Orange.

West Orange which has 10 kennels for dogs and six cat cages, also saw a fair share of surrenders in 2022.

While Pinehurst and West Orange city ordinances limit the number of animals on a single property, the City of Orange currently does not have a limit.

“That screams breed all you want,” Borel says.

“I raised $700 and was able to purchase 1,000 pounds of dog/cat/puppy food and split it according to needs to the three area shelters — Orange, West Orange and Pinehurst,” Manning says.

Manning’s inspiration came from a couple of different places.

“Aside from my huge love of dogs,” Manning says, “I have a friend who is a police officer in Killeen, and every year she has a fundraiser just like this and has built it up so successfully that she provides her local shelter with thousands of pounds of dog food at the beginning of every year.”

All those in rescues have the same message for residents.

“Spay and neuter your animals so we don’t get overloaded because they can’t anyone to adopt them,” says John Toney of Pinehurst Animal Control.