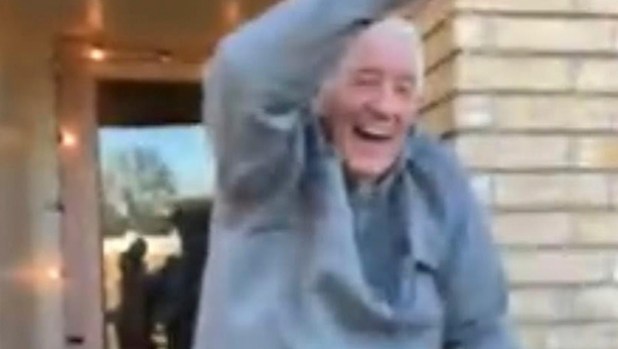 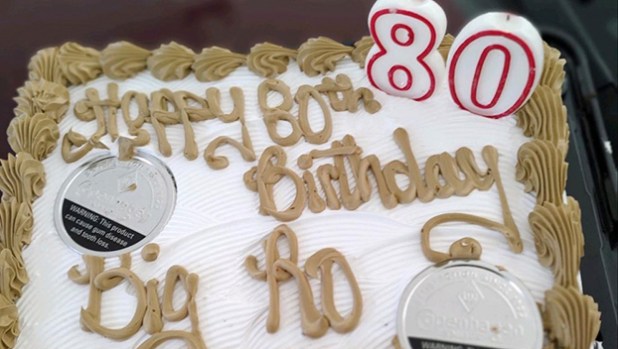 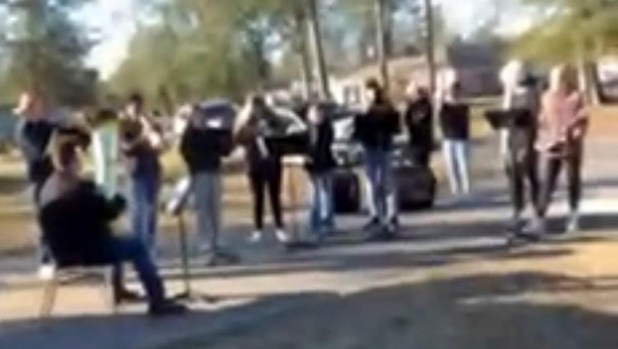 Roland Guillot sits during a special performance for one on his birthday courtesy of the LCM band.

Roland Guillot turned 80 years old on Christmas Eve and ended up getting the surprise of his life, thanks to a little bit of help from the Little Cypress-Mauriceville High School band.

The Little Cypress resident was facing the prospect of spending his birthday (and holiday) alone, so his children cooked up a plan to remind him how special he is.

Roland has always joked with his family that being a Dec. 24 baby cost him growing up because his birthday is constantly overshadowed by holiday festivities.

That was not the case in 2022, and Joe Bob Edwards helped make the fun happen.

“He is my stepdad, but he raised me,” Edwards said of Guillot. “That’s important because he had three sons from a prior marriage. They split time growing up between Orange and California, and we’re like the Brady Bunch, one big happy family.”

There is also a daughter in the mixed family raised by Roland and his wife Grace, who passed away in 2020.

Now the children are spread across the United States, with two in California, one in Indiana, one in Colorado and Edwards in Houston.

“He is all alone and getting up there in age,” Edwards said. “He just went through a couple of knee surgeries and is not getting around as well. My brothers, sister and I were talking one day and were feeling so bad for the guy. It’s a big round birthday; 80 is a big deal and no one is there. We asked, ‘how can we make his day?’”

They connected with Israel Castaneda, who is the director of bands for Little Cypress-Mauriceville CISD.

“He was so helpful with pulling together a group of students to pull off what we did, which was great,” Edwards said of Castaneda. “I asked if we could pull together some students and get them out on the front yard as a surprise. I said if you could play Happy Birthday and a couple of Christmas carols, you would really make his day. He immediately agreed, and said, ‘this is a great idea.’ (Castaneda) is a great guy. He is fantastic.”

So on the morning of Dec. 24, a group of LCM band members made their way to Guillot’s front door for a birthday and Christmas surprise.

“He has a caretaker there, so we got her in on the surprise,” Edwards said. “Her name is Kendra Buxton. She took care of my mom as she was sadly in her last days. She is very tight with the family and is an incredibly big-hearted, wonderful woman who has helped us out tremendously.

“She says (to Guillot), ‘I need to get you cleaned up and out to the front yard because you have a visitor.’ We set the time and logistics up. Kendra ended up FaceTiming all the kids with her phone secretly looping us in as he was using his walker heading out the front door to see the band in the front yard.

“He was so surprised, blown away. He was tearing up and so happy we made a big deal about his birthday. After the fact, he said this was his best birthday ever. He was very appreciative.”

Edwards acknowledges the challenges of getting together with their spread out, mixed family, but “we were, all as kids, happy to acknowledge the guy who raised us and tell him we are thinking about him, miss him, care about him and love him. It means a lot to us. This has brought my brothers, sister and I closer together. We need to pause from time to time to remember these special occasions and honor them.”