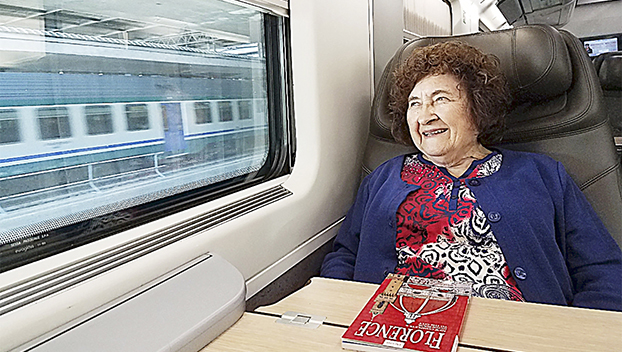 Juanita Timberlake rides on the train as she and her family are pulling out of station on the way to Florence. (Photo courtesy of Patty Willis)

On Dec. 22, I learned one of our first volunteers for the Friends of the Orange Depot, Juanita Timberlake, passed away at 95 years old.

She was a special lady who could recall so many details of her time working for the Southern Pacific railroad, in east Texas towns and in Orange. While planning a tribute to her on our website, orangetxdepot.org, I stopped to open the mail and there was her Christmas card, signed by Juanita, which she mailed on Dec. 21, the day before she slipped away in her sleep.

Tears came to my eyes, realizing she was unaware this was the last Christmas card she would send.

Juanita began her work as ticket agent at the Orange Depot in 1946. Living in a boarding room near the Stark mansion, she walked daily to work.

Expert in Morse Code, she would send messages to stations down the line as trains came through Orange. But she loved talking to the passengers buying tickets, always happy to discuss points of interest on the way to their destination. 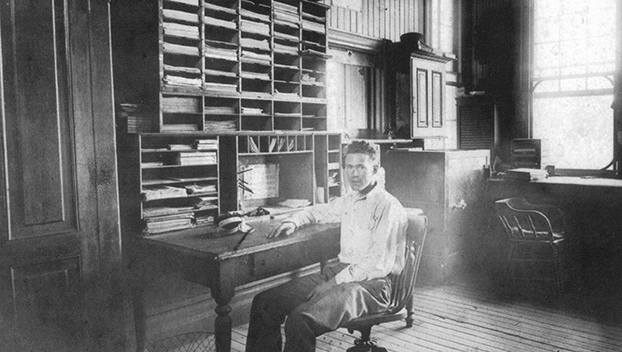 Photo from inside the Depot Office in Orange.

When her work entailed arising early to handle switching trains, she moved closer to the depot and stayed with the Brown family on 10th and Pine. Married in 1951 to another railroad agent, she worked in Orange until the depot was closed to passenger trains in the mid-70s.

In her final home, she had multiple photos of her office in the depot. I am sure she looked at the photos prior to going to sleep every night, as they were directly across from her bed.

I can only guess why Juanita loved working for the railroad. She had been there for about every major milestone in the 20th century. She waved at the soldiers going off to war, saw the wounded as they returned, handled the freight loading on the trains … lumber and other products, and saw the bags of mail rolled onto a waiting train.

FYI, when the transcontinental railway was completed, a mailed letter cost up to 25 cents, taking two weeks by horse to arrive. Afterwards, mail arrived in two days for only a penny per letter!

Juanita was quick to say there was little commotion when segregation ended in the 60s at the depot. Before that, separate waiting rooms and bathrooms served colored and white passengers.

The residents of Orange County admire and appreciate the restored depot that our organization achieved. Juanita was very proud of it and was thankful we restored it to its original beauty, so everyone could see where she worked for so many years, and even hold their special events there.

Also, friends can visit orangetxdepot.org and enjoy a tribute and video of Juanita Timberlake and Robert Mitchell, another employee who worked for 17 years in the depot, in their own words.

Juanita reminded us of the importance of the railroads in the history of this country. That is why one of the goals of the Friends of the Orange Depot is to create initiatives to educate the children of Orange. They will keep the stories like Juanita’s alive and gain a better appreciation of our Depot, which as a bustling center of activity in the 20th century was named “The Gateway to Orange,” by Mrs. Nelda Stark.

— Written by Carrie Woliver, who is co-founder of the Friends of the Orange Depot. Some information in this story is from the Union Pacific Collections in Council Bluffs, Iowa.