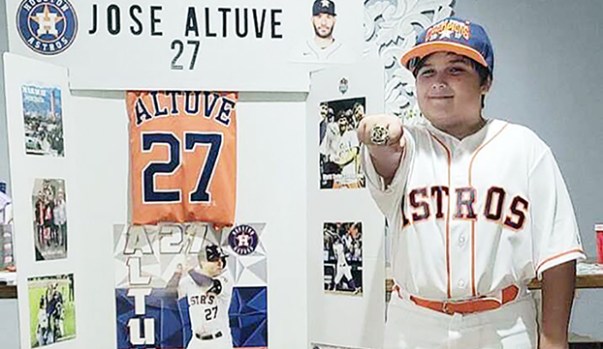 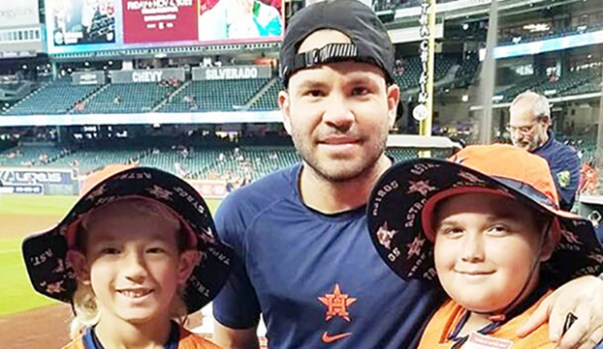 Mike Orta first picked up a video camera out of nothing more than teenage fascination.

The Southeast Texas graduate ended up videoing sporting events with friends and responding to police scanner actions just to send in raw footage to local TV stations in hopes they would buy and air it.

His early ambitions and developing talent have now led to a multi-decade career in the business that has opened doors some would only dream of.

Today, Orta lives in Nederland and works for KHOU, where he has for the past half-dozen years.

His deep roots in professional filming across Texas recently led to an unlikely connection between his son, Maddox, and one of the best baseball players on the planet — José Altuve of the Houston Astros.

Maddox is a fifth grade student at C.O. Wilson Middle School, where he was given an opportunity for a school report on a public figure who does things for the community and nation.

Many students chose presidents of the United States, but Maddox chose José Altuve, the Venezuelan-born professional baseball player with a history of community service and a big heart.

The project required Maddox to collect and display a number of biographic information pieces about Altuve, and Orta wanted to make sure his son had everything correct.

So, he approached Altuve while on a filming assignment late in the baseball season.

“He said, ‘why is he doing it on me?’” Orta remembers of his conversation with the former MVP. “You are José Altuve and he looks up to you like most kids do. He was told one day he was too small and could not play a position in football just like you were told you couldn’t play baseball. He has always been inspired by you and admired you.”

Orta said Altuve loved the idea, confirmed all the important information on his life and asked to be kept up on the project as it was graded.

Well, Maddox ended up earning an “A” for the effort, and it was Altuve who reminded Orta several weeks later wanting to know how the project went.

“He said, ‘that is amazing. Listen, bring him to a game and I want to personally meet your son and thank him for that,” Orta recalls of Altuve’s reaction.

So right before the playoff run this year, Orta and his family had Sunday tickets for a game in Houston.

Altuve asked for a list of names because he wanted to meet everyone.

“I didn’t tell my family until the day of as we were walking to Minute Maid Park,” Orta jokes of the memory. “They were all looking at me wondering, ‘what are we doing, where are we going?’

“My son asked if we could watch batting practice. I said ‘yes, probably so.’ We were going down this VIP elevator that takes us straight to the field. They are all looking at me, and I said, ‘maybe, I forgot to tell you. We’re going to be on the field, and José Altuve wants to meet Maddox.’ The look on his face, the look on my wife’s face, my daughter and my daughter’s boyfriend, my sister-in-law, her son, they were like ‘WHAT!?!’”

Altuve eventually came out, met everybody, shook their hands. Everyone was blown away, so star struck, Orta said.

“Maddox got to meet José, they shook hands and they talked,” he remembers. “He gave him one of his own personal game bats. That moment has changed him. I see Maddox’s attitude differently. I see the way he approaches life differently. He is very competitive and driven more than anything.

“I’m the dad, I can talk to him until he is blue in the face about the same thing Jose talked about, but when someone outside of the realm talks to your kids, it’s different. Now, my son has that bat at home locked in a glass case, as well as a baseball.”

“It was never my idea to bring my son, it was something José wanted to do because he felt humbled that a young kid wanted to do a project on him,” Orta said. “That meant a lot to me, my family and my son.”