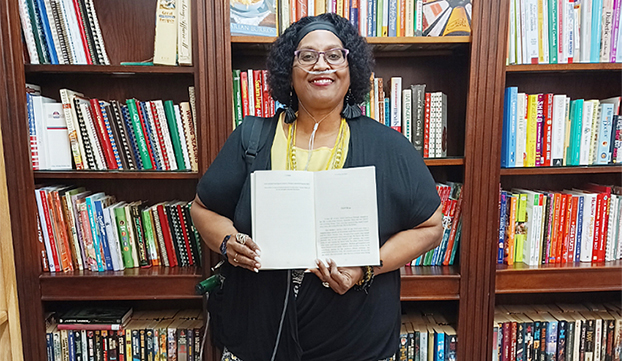 Jozette Rubin is already seated at her desk as her Sunday school classmates enter the room with greetings and giggles to one another, filling the small tables surrounding the chalkboard.

As the teacher begins the lesson about Jesus, the children quiet down and focus their attention on her.

However, Jozette hears the teacher’s words fade into the background as her mind replays being raped by her stepfather, a deacon, in this very room. He threatens to kill her mother if she tells anyone what happened, every time it happens.

More than 30 years later, Rubin reveals the dark family secrets that began haunting her from childhood, holding her stepfather accountable for committing horrific crimes against her spanning from childhood into young adulthood.

Rubin’s memoir, “A lie to Please her Mother,” was published under her pseudonym. C.T. Wright by Pen Palace Publishing Company in 2020. The story chronicles her life after her mother remarries and moves Jozette, her twin brother and their older sister into the stepfather’s home in Southeast Texas.

“When I began writing the novel, I did not want my name associated with it because of fear because he is still alive,” Rubin said. “Writing the novel began as a way to heal from my trauma because I was having a hard time forming healthy relationships with men because of all the hurt, anger and pain buried so deep down.”

Rubin said when the rape began, she believed it was only happening to her since her siblings were as tight lipped about the rapes as she had been in fear of their mother being killed.

The case was brought to court.

“I was the one who lied,” Rubin said. “That was when my mother found out about the rapes and told me to lie. So, I did. My mother explained that my father was the bread winner and her health was declining with every pregnancy, so she could not work to provide for seven children.”

Jozette obeyed her mother but betrayed her sister and the assaults continued, she said.

“My mom was trying to leave my stepdad when she died of a heart attack,” Jozette said. “My older sister escaped to college, and my twin brother married at age 16. I was left to raise my younger siblings, who were fathered by my stepfather, three brothers and a sister.”

Rubin said she stayed to protect her little sister from the same fate.

Rubin’s novel is the first book of “A Mother’s Love,” trilogy. The second book, “A Mother’s Betrayal,” is written by her older sister, Terria Waggoner, chronicling the horrors she endured. She published under her pseudonym, A. Survivor. The Third book is called, “No Love from a Mother,” written from Joe Waggoner’s perspective. However, the book will be written by Jozette Rubin and Terria Waggoner. It is currently being penned.

To purchase the book, visit amazon.com.