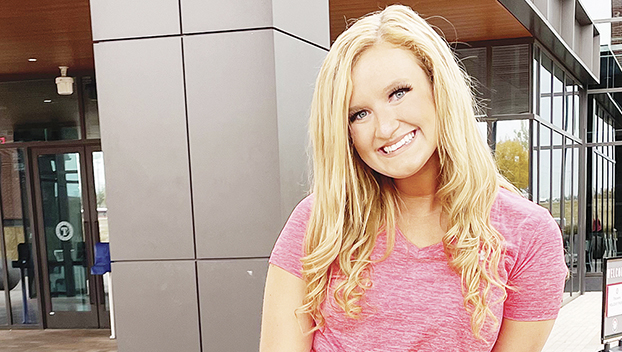 She grew up knowing she wanted to get into nursing, but dance remained in her heart, making it tough to decide which one to pursue following high school.

So first she attended East Texas Baptist University in Marshall before transferring to the University of Texas at Tyler late in the summer of 2020 for the nursing program.

“It had more opportunities,” she said. “There was a masters program. Eventually, I want to be a nurse practitioner. Tyler was a bigger city, and I just fell in love with it.”

The now 21-year-old calls the experience amazing because of her love of the school. She is set to graduate in April, happily sharing when we spoke this week, “I’m going to be a proud alumni.”

The process has proven to Baylie she can do anything she puts her mind to through God.

Baylie says she accepted Christ at a young age and was baptized at 8 years old.

“I have just continued to grow in my faith with Him,” she says. “Both of my parents are pretty religious.”

With school nearing an end, Baylie is focused on the next step in her career, which will include applying to work in the emergency room departments of facilities in the Dallas-Fort Worth region.

She is not exactly sure what city she wants to work in, but the Metroplex is a must considering another team she recently joined.

Earlier this month, following a grueling audition process, she was selected as a member of the Texas Rangers 2023 Six Shooters Pro Dance Team.

Six Shooters members perform the tasks live in the stands and on ballpark concourses, and are often shown on the stadium video boards.

“I chose nursing because I loved that more, but my heart was still on dance,” Baylie said. “This was a good way to combine both. I have been a longtime fan of the Texas Rangers and saw they have a dance team, so it was like both of my worlds collided.”

Following two virtual auditions, she was invited to an in-person tryout that lasted six hours and included lots of dancing and interviews.

“It was intense,” she said. Thankfully, she received the good news through email that night.

Her roommates were the first to hear because they were right there, but Baylie’s first call was to her mom and dad.

“I feel like it is something no one I know has ever done before,” she said. “It exceeded my expectations for myself. I have been dancing since the age of 3, so I know my little 3-year-old self would be so proud of what I am doing now.”

Baylie’s background in dance covers hip hop, jazz, ballet and lyrical, but her favorite is tap.

She also teaches tap and ballet.

Next year is sure to bring new and exciting opportunities through the Major League Baseball season and fulltime work in nursing. It’s a path carved out through hard work, and Baylie wouldn’t have it any other way.

She offers a little advice for others in Orange County thinking about getting into nursing.

“It’s going to be hard, for sure, but stick with it,” she says. “In the end, you are helping other people. If it is your true calling, then you can do it. No matter how long it takes, how hard it is, you will get there and it will be worth it in the end.”