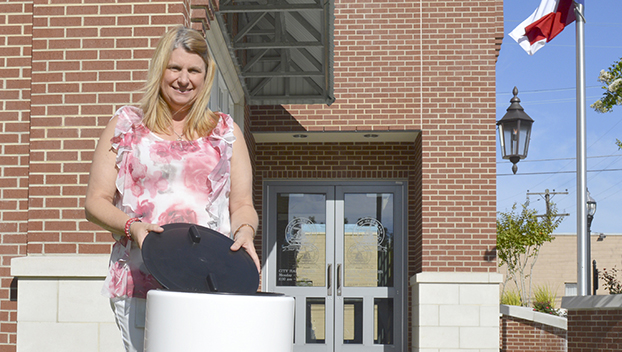 Nederland City Clerk Gay Ferguson of Orange stands outside Nederland City Hall next to a time capsule that was buried in front of the Homer E. Nagel Public Safety Complex on Boston Avenue. (Mary Meaux/The Leader)

Authorities said the fatal crash investigation that followed a local woman’s death is continuing; however, a citation has been issued.

Orange resident Gay Ferguson was killed Nov. 4 as a result of injuries suffered in a head-on collision along Interstate 10 in Louisiana.

Louisiana State Police responded to the two-vehicle crash on Interstate 10 near the Lacassine exit (LA Hwy 101) in Jefferson Davis Parish.

The initial investigation indicates a Ford F150 pickup, driven by 28-year-old Caleb Lee Bowers of Jennings, was traveling east on I-10.

For unknown reasons, Bowers lost control of the vehicle and traveled off the left side of the roadway, authorities said. After leaving the roadway, the F150 traveled through the median and vaulted over the cable barriers before entering the westbound lanes of travel.

Ferguson sustained fatal injuries. Her 3-year-old grandchild was in the SUV, sustained serious injuries and was taken to a Lake Charles-area hospital for treatment.

The crash investigation is ongoing, according to State Police, and any decisions on other potential citations or charges are pending.

Ferguson, a previous employee of the City of Orange, joined the City of Nederland in 2010 as City Clerk.

On Monday, following a short executive session where councilmembers met behind closed doors to discuss personnel, the City of Nederland appointed a new city clerk.

A motion was made and seconded, leading to Underwood’s unanimous approval by the board.