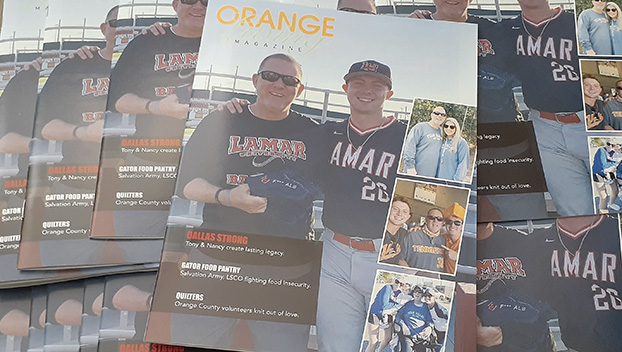 Orange Living Magazine is available now. To learn more or pick up a copy, email news@orangeleader.com.

What might pass as a fleeting mention to some could be the spark for a journalist to find a more in-depth story.

That was the case for the Orange Leader Sept. 20 when Lamar State College Orange made mention of a new endeavor through a relatively small social media post that included 10 pictures and 79 words.

In the world of “Give me all the news now” that we find ourselves in, such a release could be considered minor.

But within those words was something truly special.

The college was celebrating the opening of the brand new Gator Food Pantry in conjunction with the Salvation Army of Orange and Southeast Texas Food Bank with a goal to serve the college’s students and staff who may be in need.

I had never heard about such an effort, so I reached out to the college for more information from Carolyn Durapeaux and Wendy Elmore, who then put me in touch with LSCO’s Amy Moore and eventually Captain Jan Zuniga of the Salvation Army of Orange County.

This was far from a wild goose chase, and each person helped shape the story a little more by sharing valuable information. In fact, my conversation with Zuniga was truly enlightening.

The pantry has a service to offer, and its leaders have a mission to educate a campus population that this is available specifically for them.

“I’ve had a single mother who was in tears,” Zuniga said. “She said her food stamps are very little and just make sure her 2-year-old child is taken care of. This is where she denies herself. So the food pantry is actually making sure she is having food.”

If this effort truly takes off with the type of impact organizers envision, it could be used a model for other college campuses across Southeast Texas and way beyond.

That story is one of many featured in the current edition of Orange Living Magazine, which just hit newsstands.

I recommend neighbors and community members pay extra attention to the cover story written by veteran journalist Van Wade, who explores the passions and impacts of the Dallas family to Orange County and beyond.

Tony Dallas and his wife Nancy Dallas have raised a tremendous family. Many remember Tony as a flame-thrower at West Orange-Stark High School in the 1980s. He came back home after going to Stephen F. Austin University and started the Dallas Insurance Agency.

Now the family helps support Tony in his battle with ALS, the nervous system disease that weakens muscles and impacts physical function. Their efforts to raise money to fight the disease have already captivated our community.

Orange County and its many cities and neighborhoods are filled with residents uniquely adept at meeting challenges and rising to the occasion when it means helping someone else out.

Those unique and special qualities about our home are why we launched Orange Living Magazine, giving us a glossy, first-rate magazine that spotlights what makes our home so special — the people.

There are numerous other stories in the current edition, including features on Port of Orange improvements, the philanthropic efforts of Orange County quilters and a special look behind the scenes of efforts to restore the Gulf of Mexico’s oyster populations through new reefs.

Orange Living Magazine publishes four times a year, and there is a subscription service available to have it shipped directly to your house.

In the meantime, you are welcome to come by The Orange Leader at 1008 Green Avenue in Orange to pick up a complimentary copy or two.