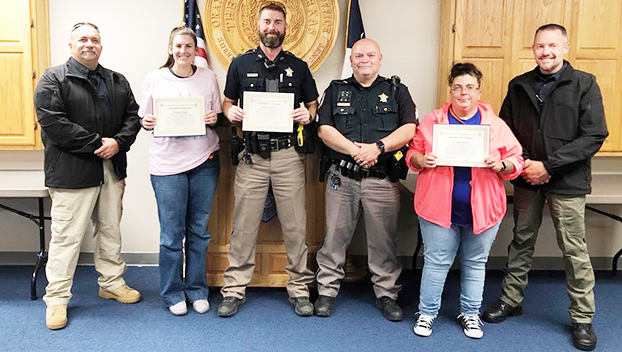 Besides growing public appreciation for the important and high-stress profession, it allows those workers access to benefits that support their mental health.

The demands of the position are never lost on Orange County Sheriff Jimmy Lane Mooney, who has been a police officer for more than 35 years.

“That job, dispatching, I couldn’t do that job,” he told me this week when discussing all that is required.

“It is so stressful, but the men and women who do that job for us day-in and day-out, or anywhere here in Texas, put it on the line. They hear the worst every day, dealing with people who are struggling in their lives. Then they go home and have to deal with it.”

The Orange County Sheriff’s Office employs a chaplain who speaks with and is available to everyone in the office, helping make sure everybody is OK.

Positive reinforcement is also a must.

Local dispatchers Jennifer Johnson and Chelsea Cripps, along with Deputy Shane Wilkinson, were publicly applauded this week for teamwork in helping talk down a potentially suicidal man threatening harm with a loaded firearm.

The police response eventually led to a safe, no-injury result.

Mooney said positive reinforcement does a lot for team cohesiveness.

“The whole department sees it and says. ‘wow, that is awesome. They are being recognized.’ When people see that and experience that, it just fires them up to do a better job next time. It’s good. They need to be told they did a great job. They did, and I’m really proud of them.”

There was a lot to be proud of, as the officers receive training in de-escalation and crisis intervention. It’s amazing to see the hard work pay off in real time.

However, all the good times and successful outcomes don’t mask the impact endured by our first responders.

That was perfectly illustrated this month when Port Arthur Fire Chief Greg Benson spoke to a local civic organization.

“Does anyone want to guess what these numbers mean?” he asked.

After he hit the next slide, audible gasps filled the room.

“It’s all over the place and, unfortunately, the reality of it is that it happens on a weekly — sometimes almost daily — basis,” Benson said.

He wants more resources for mental health needs among first responders. He praised those on the telecommunications side, while saying “guess who takes that first call?”

Again the screen changed, and on it were clips of articles written about firefighters who took their own lives — one while in the station, one in her car while parked in front of her supervisor’s house and another who had been facing online harassment.

However, he said, first responders have begun to implement a multitude of programs that address mental health— recognizing the reality of it, support from leadership, culture change, investing in resources, debriefings and peer support.

Groves Fire Chief Lance Billeaud said, “this is a need, and we need to get going on it.’”

The support system benefits firefighters, particularly a firefighter who doesn’t feel comfortable speaking with a co-worker but can reach out to a member of another department.

“You feel more comfortable opening up to a peer who has experienced those same things,” he said.

For anyone in need, the Suicide and Crisis Lifeline is available by dialing 988. Digital chat is also available at 988lifeline.org.

First responders have earned out support, whether it’s recognition for jobs well done or helpful and trained ears for those locked up by stress.

It makes sense to protect those who protect us.