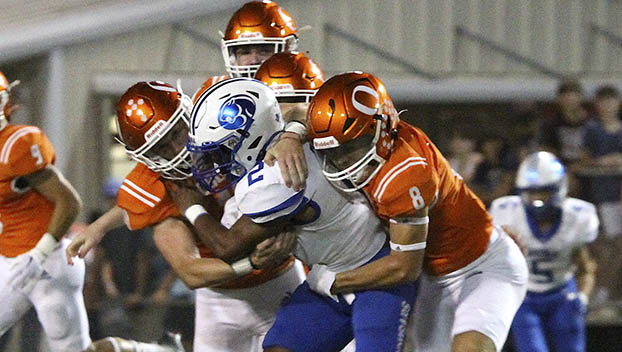 The Orangefield defense, shown here making a big stop against Buna, has really made tremendous strides in their first two District 10-3A Division I games. (Tommy Mann, Jr./Orange Leader)

ORANGEFIELD – After making a bold statement last week, the Orangefield Bobcats just want to continue to plow ahead this week as the Tarkington Longhorns march into F.L. McLain Stadium for Homecoming.

The Bobcats (4-2, 2-0) are riding high after snagging a momentum-building 25-15 District 10-3A Division I road victory over the Anahuac Panthers.

“The kids showed up, played well and got a win over one heckuva football team,” said Bobcats coach Josh Smalley. “A lot of people were not giving us a chance in that one, so that says a lot about what our kids and coaching staff achieved. I’m just super proud.”

“Our offensive line opened things up for Dischler, who broke the 1,000-yard mark last week,” said Smalley. “To hold an Anahuac offense to just 15 points was huge, and we held them scoreless in the second half. They came in averaging over 40 points a game.”

Now the Bobcats are looking to put that big win behind them and get ready for a much-improved Tarkington team.

Tarkington comes in 4-1 overall and 1-0 in district play after turning back Hardin 14-6 last week.

“They are going to come in here with that Double-Wing stuff that he ran so well in Liberty, and they get after it defensively too,” said Smalley. “That’s probably where they’ve improved the most. They know what we like to do and we know what they like to do, so it should be a good battle.”

The Longhorns attack is led by running back Karson Jones, who has zipped for 817 yards and eight touchdowns on 101 carries. Fellow backs Gunner Moore and Michael Galvan have teamed up for 529 yards and five TDs on 96 carries.

Tarkington quarterbacks Trace Edwards and Tanner Johnson have combined to complete 11-of-24 passes for 239 yards and six TDs. Receiver Enrisel Maalaelo is a threat with seven catches for 125 yards and three scores.

“The Jones kid is definitely their workhorse. You have to contain him and not let him get away from you,” said Smalley. “They have a couple other good backs that can go. There quarterbacks distribute the ball to the backs well and you have to be careful and make sure they don’t burn you with a surprise in the passing game.”

Both teams like to control the football, and whoever does it best will likely be the team that comes out on top.

“Tarkington likes to utilize the clock with long possessions and they like to grind it out, just like we like to do,” said Smalley. “We want to get as many possessions that we possibly can and not turn the ball over. Turnovers could be key in this one, because you want to take advantage each time you have the ball.”

Smalley feels the Bobcats are ready to battle again.

“Last week was a pretty emotional win but we’re telling the kids we can’t rest on that. We have to keep on building off of it and move forward. It’s Homecoming week and all, but we can’t let anything distract us. We’re just two games into district and we have a long ways to go. We’ll be fine as long as we maintain the mindset that we have to go at it hard each and every week.”