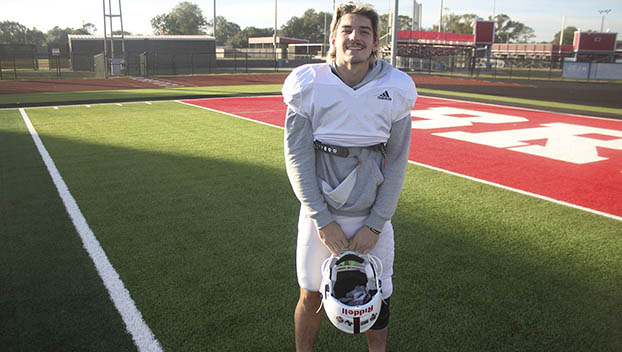 BRIDGE CITY – No question about it, their bye week last week was perfect timing for Bridge City senior Noah Broussard and his Bridge City Cardinals teammates.

The Cardinals definitely went into it limping, as the injury bug reared its ugly head.

They lost both quarterbacks, including starter Hutch Bearden, along with tailback and defensive line standout JS Bearden. Stalwart defensive lineman Nick LeJeune is also out with a hand injury.

“That bye week, it was like a breath of fresh air,” expressed Broussard. “We have been so banged up all season. It really gave us a chance to heal a little. With so many people out, it gave us an opportunity to move people around to different spots and see what we can be able to do.”

Broussard, a standout at linebacker last year, has battled through an injury already, as well.

“I had a tough bone bruise that forced me to miss the first game against Orangefield,” said Broussard. “I kept trying to play with it and I made it worse. But I so wanted to get out there and play. That’s the way so many of us are. We hate missing games. As a senior, you want to be out there every week.”

Broussard started the season playing at tight end and receiver but his services have been needed at running back. He gladly accepts the challenge.

“I’ve always been the type of player that loves to get his hands on the ball,” said Broussard. “I’ve always felt I could run the ball pretty well, and now that I have the opportunity, I want to take advantage of it. I feel good to be put in any position that I can help the team at.”

The injuries have definitely been frustrating for the senior leader.

“It has been tough because you could see us get better throughout the season last year, and we won a couple games late that we wouldn’t have won in the past because we were in better shape and on the same page,” said Broussard. “We really wanted to get over the hump this year, but the injuries have be so tough. We’ve constantly moved people in and out and changed positions. But we keep battling and we’re continuing to adapt. I think we have some good games ahead for us.”

“We’re really looking forward to it, and I felt we learned a lot about ourselves during the break,” said Broussard. “We’ve got some guys that are ready to go out there and compete. We’ve been through some adversity, but I feel like it has made us stronger.”

Broussard definitely has plenty of spirit as the Cardinals have reached the halfway point of their season.

“For us, it’s all about that next man up mentality,” said Broussard. “These are my boys out here and as a senior, I’m going to give it everything I’ve got. We’re going to go out there with some toughness and effort and see where it can take us.”