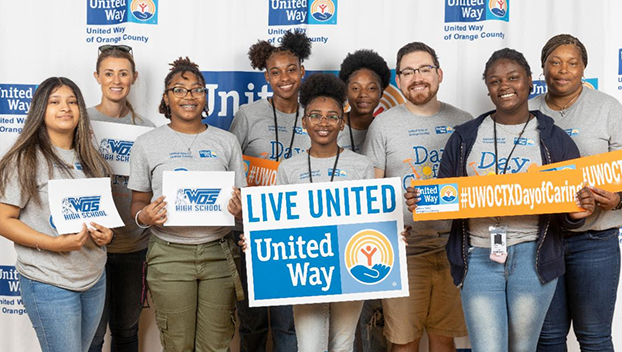 It was fantastic, but it was hot, especially for the teams that were outside.

The grand total was 677 volunteer hours compressed into a Friday of service in Orange County.

“We just made sure that everybody who had projects outside took breaks and had water,” McAllister said. “Most of the projects were done by lunchtime. There were only a handful of them that went past lunchtime. It was a really good day.”

McAllister says she has always told people Day of Caring is her favorite event led by United Way.

“It is also the most logistically challenging one, because you have to match up the right number of volunteers with the right projects,” she said. “Some of the projects require a little bit more skilled labor than others. It is challenging sometimes to match all of those things.

“To have all the people show and 677 volunteer hours is just a very incredible, very heartwarming experience.”

Day of Caring is the largest volunteer event of the year, and the teams met at the Dow Business Center, formerly the DERA on Irving Street, at 8 a.m.

After enjoying donuts and kolaches during a quick safety meeting, everyone set off for a day of community impact.

It was a massive logistical issue, so teams had to pre-register with United Way to help serve on projects submitted by partner agencies. Organizers took the volunteers and matched them to projects and ended up with more volunteers then projects.

Organizers had to reach back out to the agencies to get more projects.

McAllister expressed some frustration, noting the event didn’t generate the same influx of donations as one held in 2020.

“I think it kind of proves times are tight for everybody right now,” she said. Then she noted, “the people that were dropping off were very generous and very happy to help. Some of them were like, ‘I know it is not a whole lot.’ But, it really does all add up. We were very grateful to everybody that donated.”

In all, there was a great turnout of helpers as 40 hours worth of volunteers were recorded.

That resulted in 1,316 non-perishable food items received for an estimated value of $1,238.25, according to the United Way.