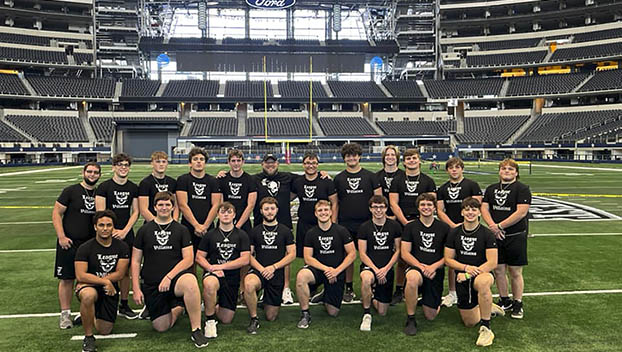 The Vidor Pirates were able to take of tour of AT&T Stadium in Dallas where the Dallas Cowboys play before taking on Trinity Christian in their last non-district game. (Photo courtesy Mike Trahan)

VIDOR – After wrapping up non-district play in style, the Vidor Pirates are looking to tinker and get better in certain areas during their bye week this week before zipping into District 10-4A Division I action Oct. 7 when they welcome in the Little Cypress-Mauriceville Bears to Pirate Stadium.

The Pirates (2-3) are coming off a long, successful road trip when they knocked off Trinity Christian Academy 22-14 in Addison’s Tom Landry Stadium, which is located a little north of Dallas.

It was definitely a hot and humid battle Saturday with that 2 p.m. start.

“All year long, we’ve loved starting at practices at 5:50 a.m. and I thought that could really give us an advantage,” said Pirates coach Jeff Mathews. “But, that 2 p.m. start Saturday in that North Texas heat was brutal. We’re not use to that. But the kids made key plays in crucial moments. We moved the ball well early and we made some really good defensive stops, especially late.”

The Pirates got all three of their touchdowns courtesy of the ground game. Tailbacks Dan Villadsen and Isaac Fontenot found the end zone, along with fullback Jason Watson.

“Fontenot, he’s just a sophomore, but he’s capable of being a beast for us,” said Mathews. “Villadsen, he’s our fastest kid, so those two are a good mix. Watson is a bull and we’re going to need his senior leadership in a big way when district starts.”

The Pirates found time to visit AT&T Stadium, home of the Dallas Cowboys, on their road trip.

“The kids, they had so much fun and they were definitely starry-eyed,” said Mathews. “They got to go hang out on the field and run some mock plays. They got to hang out in the Cowboys locker room. It’s amazing how big that place really is. I would much rather get there the old-fashioned way, and that’s making it all the way there with the kids and the coaching staff and play for a title. That would be so awesome. I’m really happy that they had the experience of the tour though, they had a blast.”

Mathews feels the Pirates have a ton of work ahead of them before facing the Bears in the district opener.

“The most worrisome thing is that we tend to continue to shoot our own self in the foot,” said Mathews. “We’ve cut down on the turnovers but the penalties are still mind-boggling. We had 10 offensive penalties, which helped keep Trinity in it. We came away empty on three Red Zone attempts because of penalties pushing us back. We absolutely have to turn that around and we’re going to stress it all week.”

The Pirates, who shared the district crown last year with LC-M but earned the district’s No. 1 playoff seed due to their win over the Bears, have two huge games in a row to start district play against the Bears at home and then go to Lumberton the following week.

“Here we go, it’s going to be like playing Georgia and Alabama back to back,” laughed Mathews. “Those two teams are loaded with so much talent. We’re going to have to be completely on our ‘A Game’ to play with those guys. No turnovers, no mistakes, or you could be in trouble.”

Mathews said Coach Eric Peevey will have the Bears fired up coming over to Vidor.

He said the Bears are loaded and mix things up well on offense with tailback Da’Marion Morris capable of going the distance in a hurry.

“He’s just a great all-around player,” said Matthews. “He’s great on special teams and he is great in the secondary. Their defensive end, Amier Washington, every time I see him he just looks like he gets bigger and stronger. He looks like that old Dallas Cowboy Leon Lett. The Bears, they are going to be a handful, and it should be a really good test for both teams in front of a big crowd.”