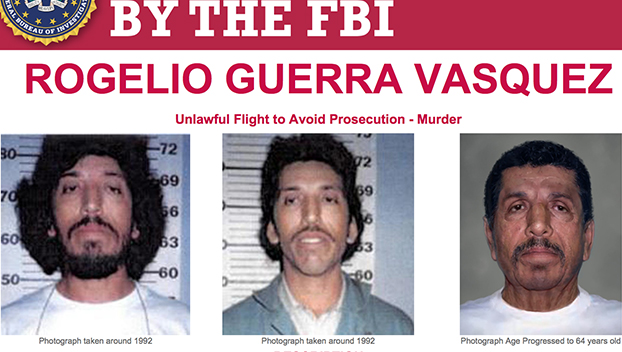 The FBI recently released new forensic age progression photos of Rogelio along with a reminder that there is still $10,000 in reward money for information leading to the arrest and conviction of Rogelio Guerra Vasquez.

Vasquez is charged with the 1997 killing of Sugie Vasquez. In 2006 a federal arrest warrant was issued after he was charged with unlawful flight to avoid prosecution.

Rogelio is described as 5 feet, 11 inches tall with black hair, brown eyes and weighing about 150 lbs.

Vasquez has ties to, or may be residing near Monterrey, Mexico. He should be considered armed and dangerous and an escape risk.

Anyone with information about this fugitive is asked to contact a local FBI office or the nearest American Embassy or Consulate. For more information, call 713-936-7642.

Sugie Vasquez’s daughter Emily Ross told Orange Newsmedia there was such a disconnect with Rogelio, her father, that she never called him “Dad.”

“It was literally like living with a stranger. He just had this aura about him — he would walk into a room, and I would leave,” Ross says. “Sitting in a waiting room [with strangers] was more comfortable.”

One way she took the power back following the killing was to start the Sugie Lane Foundation in honor of her mother and to help other victims of domestic violence.