Mustangs, Bears battle it out in an instant classic Orange Bowl 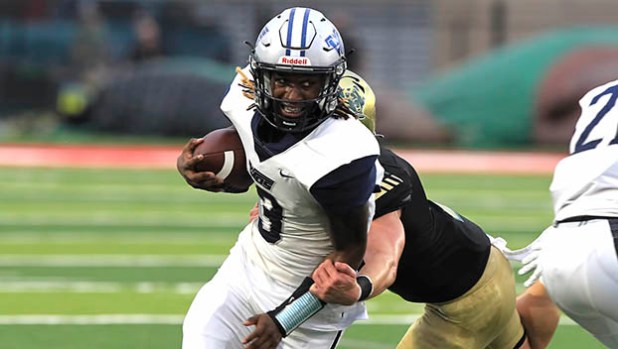 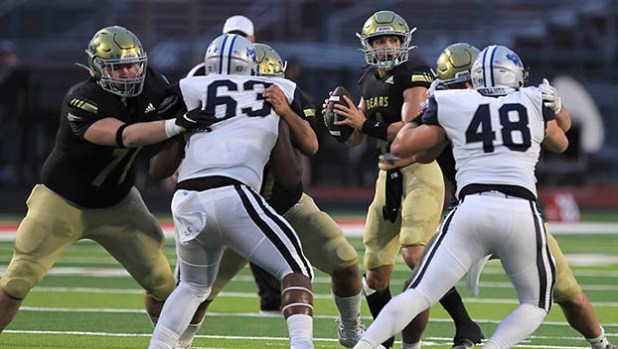 BRIDGE CITY – The 2022 version of the Orange Bowl between the West Orange-Stark Mustangs and Little Cypress-Mauriceville Battlin’ Bears will be remembered as a classic.

The two teams got after each other all night Thursday before the Mustangs finally persevered to down the Battlin’ Bears 38-32 at Larry Ward Stadium at Bridge City High School in front of a rowdy capacity crowd.

The Mustangs (2-0) put together a long drive late after the Bears (1-1) scored 12 unanswered points to tie the game early in the fourth quarter.

The Mustangs went on a grueling 11-play, 64-yard drive to seal it late in the fourth quarter.

Jailen Brown ate up a lot of yards playing as a Wildcat quarterback, carrying twice for 38 yards.

The Mustangs got on the board when offensive lineman Andrew Wilson scored on a one-yard run on fourth-and-goal. The Bears stuffed Brown on the two-point conversion run but WO-S led 38-32 with 3:53 remaining.

The Mustangs were able to stifle the Bears on the next series on four downs and then run out the clock.

“Phew, this was a great game tonight played by two excellent football teams,” said Mustangs coach Hiawatha Hickman. “We were down 20-8, but the kids responded in the second quarter with 24 straight points. We went into the half with the momentum, but give LC-M credit. They came out and hit us in the mouth in the second half. We made some big plays down the stretch when it counted. We got into the Wildcat offense on that last drive and were able to run downhill because we thought the Bears were getting a little tired.”

The Mustangs picked up 277 total yards while the Bears had 261.

Quarterback Keyshawn Robinson led WO-S with 95 yards on 10 carries. Jamal Shaw had 58 yards on 10 totes while Brown had 49 yards on four carries. The Mustangs hurt themselves at times with 11 penalties for 94 yards.

“We moved the ball at well at times and made big plays when we had too,” said Hickman. “The Bears, they are so big and talented up front on defense and they were a challenge, but I thought our offensive line came up huge late for us and that was a big difference. It was a great game and it had the fans on the edge of their seats all night. LC-M is going to be trouble down the road. They are going to be tough in their district and will probably win it, so this is definitely a quality win for the Mustangs.”

LC-M quarterback Dean Reynolds completed 11-of-16 passes for 146 yards and rushed for 35 yards on 12 carries. Bears back Da’Marion Morris rushed for 86 yards on 21 carries. Receiver Jacob Pollock hauled in four catches for 61 yards.

“It was a great effort by both teams, and congratulations to Coach Hickman and the Mustangs,” said LC-M coach Eric Peevey. “Our kids played hard, but there were some mistakes that came back to bite us. Just like last year’s game, that second quarter came back to haunt us. We have some young kids that are on the varsity for the first time, and games like this are a great learning experience. You almost have to play perfect to beat the Mustangs. We came close. It is tough to swallow, but I think this game is only going to make us better.”

The Bears erased a 12-point halftime deficit to tie it up at 32-32 early in the fourth quarter.

“Our kids came out firing in the second half and they just kept battling and got right back in it,” said Peevey. “You love to see that. Our kids, they have the competitive spirit We made some adjustments at the half that helped, but WO-S made the plays late they had to make to get the win. I’m definitely proud of our effort. Orange County football fans got their money’s worth tonight.”

After holding the Mustangs deep in their own territory, Morris got free on a 21-yard punt return to the WO-S 22, and a unsportsmanlike penalty on the Mustangs moved it to the 11 early in the fourth.

Six plays later the Bears got in the end zone on fourth-and-goal from the 2, with Reynolds scoring a two-yard keeper. The extra-point attempt was tipped, but the Bears got even at 32-32 with 9:42 remaining.

Reynolds completed two passes for 44 yards and capped it on a fourth-and-9 play from the Mustang 33 when he spotted receiver Elijah Allison in the left flat and Allison did the rest, scoring down the left side for the 33-yard TD. The extra-point snap was botched, but the Bears cut the WO-S lead to six.

The Mustangs tallied 24 unanswered points to snare a 32-20 lead at intermission.

After stuffing WO-S’ Shaw on fourth-and-1 from the Mustang 41 with 9:57 in the first quarter, the Bears immediately launched a five-play scoring drive.

The big play came on a perfectly executed 20-yard screen pass on the right side from Reynolds to Morris that got to the Mustangs 10. On the next play, Morris scooted around the left side for a 10-yard touchdown scamper. Kicker Danyon Craft booted the extra-point, giving the Bears a 7-0 edge with 8:12 in the first quarter.

The Mustangs countered nicely on the next series, navigating 55 yards in six plays to hit paydirt thanks to Robinson’s legs.

The WO-S junior QB carried three times for 43 yards on the march. He broke loose on a 19-yarder scamper to start it. He broke open on a nine-yard keeper to the Bears 30, and 15 more yards were added after a facemask call on the Bears, moving it to the 15. Robinson dropped back looking to pass on the next play but decided to tuck it in, and it paid off as he zipped 15 yards around the left side for the touchdown. Brown ran up the middle for the two-point conversion run, giving the Mustangs a 8-7 lead with 6:35 in the first quarter.

The Bears answered nicely to retake the lead, going 65 yards in 11 plays. Morris carried six times for 40 yards on the series and capped it with a four-yard touchdown dart off right tackle as LC-M snared a 14-8 lead with 0:54 in the first quarter.

The Bears went up by 12 early in the second quarter.

After forcing the Mustangs on a quick three-and-out, Morris brought back a punt 14 yards to the Mustangs 40 and 15 more yards were tacked on after a late Mustangs hit to give the Bears the ball at the 25.

Two plays later Reynolds spotted wide-open tight end Pollock over the middle for a 25-yard scoring toss. The extra-point kick failed, but the Bears led 20-8 with 10:57 in the half.

Raymond Mallett Jr. brought back the ensuing kickoff 33 yards to the Bears 47, and the Mustangs scored four plays later. Robinson hooked up with receiver Nicholas Crosson on a 21-yard connection along the right side to the Bears 15. Shaw carried twice for 15 yards, including a seven-yard touchdown jaunt up the middle. Brown ran in another two-point conversion run off the right side ,as the Mustangs trimmed it to 20-16 with 9:16 in the half.

WO-S capitalized on a Bears miscue when Mustangs defensive end Carlton Simien Jr. fell on a fumble by Morris at the Bears 27 with 8:31 in the half.

The Mustangs found the end zone four plays later. Shaw got loose for a 15-yard run to the 12, and Dustin Helm capped it with a 12-yard touchdown gallop around the right end. Andrew Wilson scored on a two-point conversion run, giving the Mustangs a 24-20 lead with 8:06 in the half.

WO-S stopped the Bears on a fourth-and-9 pass from the WO-S 25 with 3:13 in the half, and the Mustangs went on a seven-play, 75-yard scoring drive.

Robinson teamed up with receiver Taydren Perrault on a 24-yard strike to the Bears 40. Robinson escaped pressure for a 21-yard keeper to the 15, and he scored three plays later when he eluded several Bears defenders to get down the left sideline for a 11-yard score. Brown ran in another two-point conversion, making it 32-20 with 0:35 in the half.

WO-S finished with 188 total yards in the half, while the Bears accumulated 171.

Reynolds completed 6-of-9 passes for 77 yards for the Bears, while Morris netted 70 yards on 13 carries.

The Mustangs, who lead the all-time series against the Bears 33-2, return home next week to host the Port Neches-Groves Indians, while the Bears return to Bridge City to face the Cardinals.