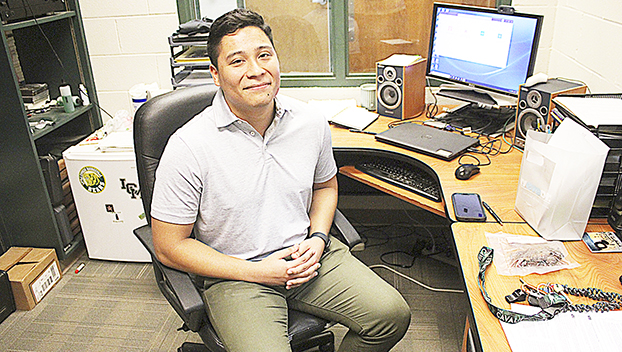 Israel Castaneda is in his first year as director of the Little Cypress-Mauriceville Battlin’ Bear Band. (Van Wade/The Leader)

The always awesome Little Cypress-Mauriceville Battlin’ Bear Band has a new leader this season, but it is definitely a face many are familiar with.

“I’m honored to have such a golden opportunity,” Castaneda said. “To have been able to work with Jose Ochoa and Kathy Smith the last few years has truly been amazing. The kids seem to be pumped up and excited that I’m here, and that’s huge for me. I have known so many of them since they were freshmen. They are accustomed to me being around.”

The Bears Band advanced to the 2020 and 2021 Area Finals, with Castaneda playing a huge role.

Castaneda has been hanging around the Band Hall quite a bit this summer, getting adjusted to his next role.

“We’ve had several Leadership Camps lately and the kids know what to expect,” he said. “It’s going to pretty much be business as usual here, with very few changes. We’ve always had a great thing here, and the kids know how everything operates, so it should be a smooth transition.”

Castaneda said the thing always about Ochoa was the love and appreciation he had for the students.

He truly hated to leave, according to Castaneda.

Castaneda is really getting “giddy” about next week, when the Bears Band arrives and starts working on marching skills.

“We plan on having a lot of fun with it; we always do,” he said. “Of course, we’re going to have to beat the heat because it has been crazy hot. We don’t have our usual marching practice spot with the ongoing construction at the stadium but we’re going to have room and we’ll be ready to go to work.”

Castaneda is so looking forward to game nights on Fridays, starting with the last Friday in August.

“Football is what it is all about in the fall,” said Castaneda. “It’s where almost entire communities come together for a great night. The band is always there to lift spirits and get everyone going. Last year was so much fun. The football team was rolling, and as a band, we were always rocking it. We want to be able to do that again this year. And, yes, we’re ready to bring out ‘Sweet Caroline.’ Everyone loves that and it seems like the entire crowd sings along with it.”

Castaneda has “tooted his own horn” over the years, as well.

He got involved with band at Port Neches-Groves High School, where he graduated.

He graduated from Lamar University in 2019, where he was a major part of the Cardinal Band Program.

He was a section leader for the Lamar Marching Band and was a Drum Major in 2017.

“I fell in love with band at an early age, and by the time I became a senior at PNG, I knew what my career path was going to be,” said Castaneda. “Being involved in the Lamar Band was really a great time. A lot of time and energy and teamwork goes into a college band and I learned so much.”

He was also a part of a competitive drum and bugle corps when he marched with the Cavaliers Drum and Bugle Corps.

“What can I say, I love to march,” laughed Castaneda. “The most fun thing about the Cavaliers Drum and Bugle Corps was that we were able to travel quite a bit throughout the country and meet so many different people. I always like to tell the kids that being in band can allow you to do and see a lot of things in life.”

LC-M Superintendent Stacey Brister is thrilled to have Castaneda to lead the Bear Band charges.

“We absolutely believe there is no one better to carry on the tradition of excellence we have worked so hard to cultivate here at LC-M,” said Brister. “Israel has proven his dedication to preparing our students for success and we trust that under his leadership, our band program will continue to be one of the finest in the state.”

Castaneda was ecstatic when he realized that it was his job to lead the Battlin’ Bear Band.

“I really didn’t have it in my mind after Jose left that I was going to go for the job,” said Castaneda. “But Mrs. Brister and some administrators kinda gave me a nudge and told me ‘You got this’ and that was one of the best feelings ever. For them to have confidence in me really made me feel great about everything. Now I’m just ready to get everything up and going and I can’t wait to see everybody out here next week.”