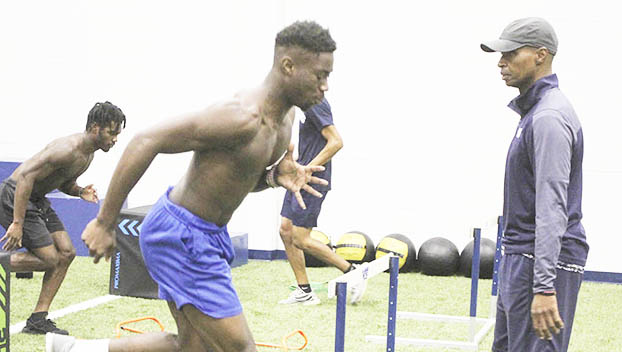 Russell Bottley is born and bred in Orange, and he sees this weekend’s Juneteenth Community Prayer Service as a perfect opportunity to bring the community together.

The public is invited attend the event at 10 a.m. Sunday at Riverfront Pavilion on Simmons Drive in Orange.

“This is the first time that our Mardi Gras krewe has put on an event of this nature,” he told me this week. “We planned it before the pandemic and had to put it on the backburner. Now it has come together for this Juneteenth. With the national federal holiday, it has worked out great.”

Krewe De Onyx regularly performs services for the community, including sponsored clean-up events and giving projects for students and families in need during the holidays.

Back-to-school drives are also part of the krewe’s outreach efforts.

Bottley joked that Mardi Grad season is always fun, especially with all the celebration.

“During the other times of the year, like now, we’re putting on this big event, which has been our baby for the last year and a half,” he said. “The other things we try to do in the community are about helping people out. We do not want any recognition.”

“Now it is coming to fruition,” he said. “I think we’ve dotted the I’s and crossed the T’s.”

The prayer service is open to everybody. It does not matter the religion or denomination of attendees.

Organizers stress the event is all about bringing the community together.

Bottley points to a pretty strong lineup with Henry Lowe of the Orange African American Museum speaking on the history of Juneteenth.

Orange native Father Jim Sichko, a missionary priest, described by Bottley as a dynamic speaker, is also scheduled to address the crowd.

“I hope it further brings our community together,” Bottley said. “With so much in the news about negativity and decisiveness among the communities, I hope little ole Orange starts something special and puts us on the map for bringing our community and citizens together. Not only is this camaraderie, and we can just get together and have a prayer service, bringing communities together for our town and everything.”

“With Juneteenth being realized as a national holiday, we felt that it was important for us to practice our civic responsibility and lead the community in commemorating and celebrating this historic day in the history of Texas and the United States,” Guillory said.

The inaugural event includes activities for the entire family. Live music, food vendors, non-food vendors and special guest appearances are all scheduled for the festival.