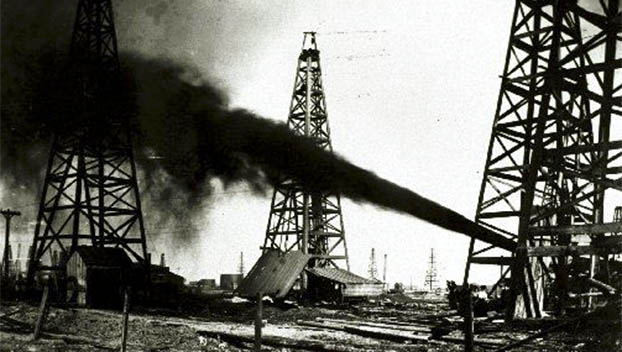 The Spindletop oil field was tremendous and started the oil industry in Texas. (Texas Energy Museum)

In the early years of the 20th Century, Orange businessmen had several ideas about bringing new industry to Orange. Sadly, none saw fruition. One of those ideas was to build an oil refinery in Orange.

In January 1901 oil was discovered at Beaumont. The Spindletop oil field was tremendous and started the oil industry in Texas. Nine months later, in September 1901, there was a large field discovered on the Mamou Prairie near Jennings, Louisiana.

Smaller fields were found at Ged and Edgerly, Louisiana. Orange was on a direct line with these discoveries. It was believed that drilling for oil would begin at Orange soon.

A group of investors in Orange formed the Orange Oil Company in 1903 and began to make plans to drill at Orange. They even selected a high point of land on Adams Bayou to build a refinery.

C.D. Webster had operated a small refinery at Jennings. In 1910 Webster closed that refinery and decided to move the equipment to Orange and rebuild the refinery on Adams Bayou. Webster’s plans were to bring crude oil from Oklahoma to his refinery.

Webster’s refinery made good products, but the supply of crude was unreliable and did not last, Webster closed his Orange refinery less than a year after production began.

Discoveries at Orange were not too impressive until 1913 when the Bland well “gushed” in. It was the well that started major drilling in the Orange oil field. After the Bland gusher, drilling and production increased in the Orange field.

Major oil companies like Gulf, Humble, the Texas Company and Sun became major lease holders. Other oil speculators and companies formed and went out of business. It was a wild time.

In December 1921 an announcement was made that the Seaboard refinery would be reopening on the site of the former Webster refinery. Seaboard was going to build a pipeline direct from the oil field to the refinery.

Seaboard Oil and Refining was a subsidiary of the National Oil Company of New York. National had a former presence in Orange as the National Shipbuilding Company, one of the of the builders of the WWI cargo ships.

Seaboard had taken possession of pipelines that had been built and used by Webster Refining. They had laid a 10 inch and a four inch line running from the refinery site to the riverfront.

On the morning of Dec. 10, 1921, the company was distributing pipe along the oil field road in preparation to build the pipeline from the field to the refinery. At the refinery there was storage available for 28,000 barrels of oil.

Seaboard had an agreement with the Atlantic Production Company to furnish the refinery with feedstock. At the time Atlantic had one well producing and two more were being drilled.

National Oil had been operating in the Mexican oil fields exclusively and had been attracted to the opportunity that the Orange field promised. Seaboard would be the division of National that would operate in the Orange field.

The company planned to bring to Orange the tankers that had formerly operated out of the Port of Tampico. Orange had ready access to deep water via the Sabine River and the ship channel to the Gulf of Mexico. Product could be refined in Orange and shipped to any port in the world.

The real boom in Orange started in 1922, when the Chesson No. 1 well was brought in by Humble Oil. It was a half mile from the Bland well and was so prolific that it was called “The Wonder Well.”

The profuse production in the field only lasted about three years. By the end of 1925, most of the drilling crews left Orange and by 1927 only one well was being drilled.

Along with the demise of the field, so went the effort to have a refinery in Orange. Production in the oil field was going to the refineries in Port Arthur, Port Neches and Beaumont. The crude oil was carried by barges. Pipelines were later built to carry the crude.

Orange never became a destination for crude oil, except for limited quantities and for a very short time.

Webster and Seaborne tried to bring oil east to Orange for refining but could not compete with the major companies who already had refining established to the west.

Today, refining in Orange is a dim memory like Bloomberg Tractors, the textile plant, plans to raise thousands of chickens and a few other failed plans that are part of Orange history.