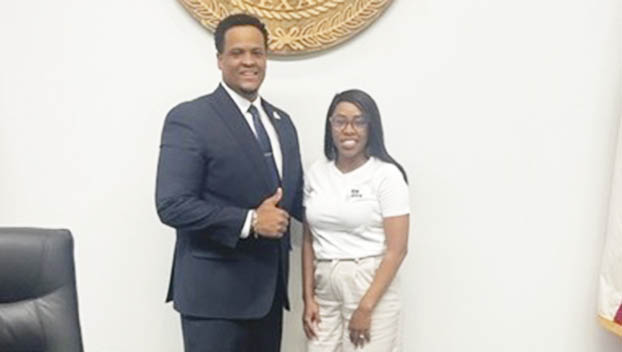 When Divon Williams began working on her masters degree in community development, the passion for service for the former high school teacher bubbled back to the surface.

She knew her career as a teacher was at a stopping point, but the desire to stay involved with the community and impact youth in a positive way would always be near her heart.

Literally the next day after she applied for the community development program, Orange Mayor Larry Spears Jr. called and encouraged her to get involved in one of the many city volunteer boards.

He asked Williams to research the opportunities. That same day she studied and was intrigued with the city’s Economic Development Corporation.

“This is the one that sparks my interests,” she said. “(The mayor) gave me Jay Trahan’s number, I contacted him and asked questions about the board. That is kind of how I ended up on the EDC board.”

Trahan serves as assistant city manager for Orange and director of economic development.

When he spoke with Williams in 2020, she was convinced this was her opportunity for service.

She joined the board in October of that year, learning the ropes and offering input on some of the major happenings taking place in our community.

As her knowledge increased, so did her role. It was in late April of this year that the City of Orange Economic Development Corporation board went to unanimous vote to appoint Williams as the EDC Board President.

More of the Orange EDC work is scheduled to go before the city council Tuesday, when the council will consider approving an EDC Infrastructure Grant Agreement with Piney Woods Sanitation, 2004 Dupont Drive, in an amount not exceed $50,000.

Williams’ name is also up individually on the agenda, where there is a motion to appoint her to the Convention and Visitors Bureau Advisory Board.

She says the last year-and-a-half have been exciting because of the consistent growth.

She credits Trahan, the mayor, City Manager Mike Kunst and Orange staff members for seeing opportunities, talking about city plans and making sure all stakeholders are involved.

“The best part of all of it is just seeing the consistency in that growth,” she said. “I was born and raised here. I feel if the community can’t see what’s already happening, they should get involved so they can actually see all the news businesses and better signage. Just look around and observe all the great things that have come. To look ahead, the people that are in place and the way they are setting everything up, we are all in place to lead this community in the direction of forward growth and development.”

Something that has definitely caught her attention are developers.

“I have noticed there is an influx,” she said. “There are more land developers: people who are coming in and wanting to build more homes. I feel like that is a great thing. They are seeing a need for investment in the community to create more property.”