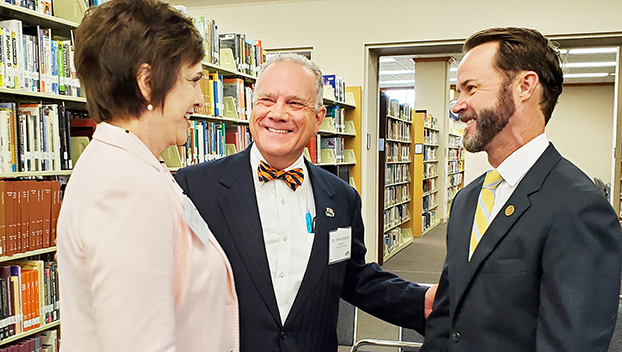 The college president said, if the grant is awarded, LSCO plans to renovate an existing building school officials are in the process of purchasing in order to accept more students to the nursing programs and increase the number of nursing graduates each year.

Lamar State College Orange is one of numerous Southeast Texas education institutions that has come together to form a coalition, which is now one of 60 finalists from across the nation seeking $70,000,000 in federal funds.

Lamar State College Orange made the application for a Phase 2 award March 11. The final decision on the grant is expected in late July. 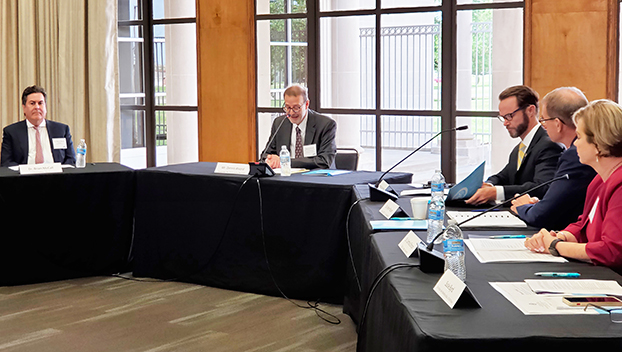 A scene from the roundtable discussion at Gates Memorial Library on the campus of Lamar State College Port Arthur. (Mary Meaux/The Leader)

Johnson met with other coalition officials and elected leaders last week in Port Arthur, which also doubled as an opportunity to welcome Dennis Alvord, the deputy assistant secretary for U.S. Economic Development and chief operating officer.

Johnson said Southeast Texas is known for its ability to collaborate when an opportunity arises.

“In this case, the opportunity to provide more nurses is one that truly benefits our entire region,” he said. “At the heart of the Southeast Texas coalition’s robust partnerships are three institutions of the Texas State University System: Lamar State College Port Arthur, Lamar State College Orange and Lamar University. Each of these institutions are committed to educating a greater number of nursing professionals in our area so that we can address the understaffed profession.”

Friday’s gathering allowed attendees to share pledges to unify forces and expand efforts to conquer the “dire shortage of nurses and healthcare workers” in the region, according to Johnson.

“It was exciting to see that even though each institution has distinct operational obligations apart from one another, we have a common goal that will change the landscape of Southeast Texas,” he said.

Johnson said LSCO receives updates as a subscriber to the digital U.S. Economic Development Administration Subscription service, which is making the phase 3 announcement.

In 2018, Texas Dept. of State Health Services found the population of nurses in the Gulf Coast region needed to grow by 11 percent to meet demand.

The same report found the population of nurses in Deep East Texas needed to grow by 33 percent. Now, hospitals report more than 700 vacant nursing positions; urban hospitals are 25-30 percent below staffing and rural hospitals struggle to open their doors.

In addition to building program capacity, the grant funds will be used to create new student recruitment programs designed to work with underserved populations, create a new pre-nursing tutoring program in partnership with the Region Five Education Service Center, create a tuition reimbursement program supported by the hospital partners, and create a counseling program for nursing entrepreneurship.