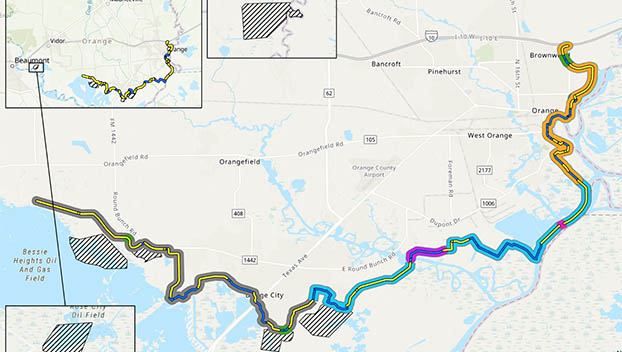 (Courtesy of US Army Corps of Engineers Galveston District)

A host of local, regional and military leaders believe Orange County is on the verge of establishing its best defense against storm surge.

System design began in 2019 and is expected to finish in 2024. Construction will take four years with a goal opening the fully functional surge protection system in 2028.

Organizers want to go into detail for Orange County residents about the protection system and answer individual questions about all aspects of the project.

Three open houses are planned this month for anyone wishing to attend.

He feels the partnership between the county, corps, drainage district and state legislature, among others, is as strong as it has ever been.

“We have been able to have very frank conversations about what the concerns of our citizens are in storm surge and rain events,” Gothia said. “The considerations have been taken to make sure we’re doing no harm.

“The message is we have heard what they are saying. We live here. We know exactly how it effects us. It is not only my constituents telling me, it is me telling me. I have the same concern for rainfall events as I do for storm surge. I think we have made great strides in making sure we are where we need to be.” 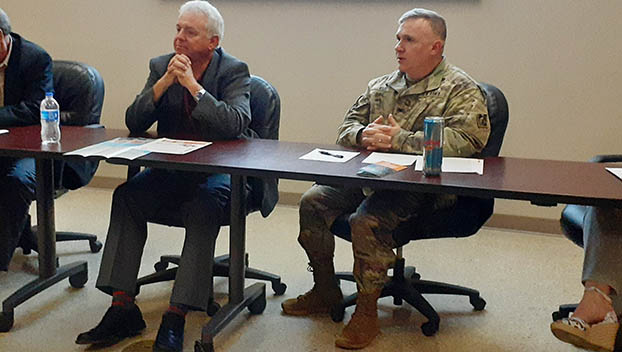 The effort will create 450 acres of coastal marsh and 560 acres of forest and wetlands.

“That is largely based on our recognition and feedback from the constituents of Orange County that their pressing concerns are the rainfall events,” Vail said. “They absolutely want a degree of coastal storm risk; they don’t want anything that jeopardizes or creates or contributes additional inland flooding behind that.”

The storm surge protection effort is part of a much larger Texas coastal levee project extending past Galveston.

The project is estimated to cost $2.39 billion, with a 65/35 percent federal-local split in financing.

According to Vail, the federal government has already fronted 100 percent of the cost, so all stakeholders know they have the funds to proceed with action.

Gothia said Orange County cannot pay for the $836 million local share, nor will it have to.

The Gulf Coast Protection District has been formed to handle payment and maintenance of the levee system.

The group has Orange County representation on its board and been meeting monthly for a year, while working with state leaders on planning.

The federal government has given the group 30 years to lockdown its payment plan.

Gothia stresses no one else in the country is approaching levee protection construction with this much teamwork and planning.

“As Orange goes, the rest of the Texas coast will go,” he said. “The Texas coast will set the state, and the rest of the nation will follow. It’s a tremendous opportunity. The ability to have this kind of funding comes once in a lifetime. This is an opportunity to have funding to create a project and build a project that will protect our community. It will protect our citizens and our people.”

Gothia said everyone involved knows they do not want to waste this momentum.

“We have fought very hard to make sure we take advantage of this opportunity that has been put in front of us,” he said.

Visit swg.usace.army.mil/S2G/OrangeCounty to learn more about the project and its proposed location.