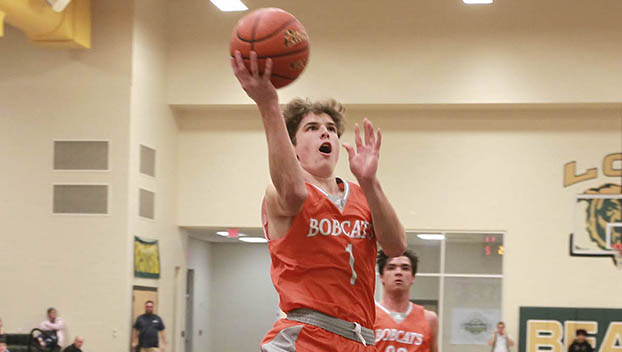 NEDERLAND – After getting off to a cold start, the Orangefield Bobcats continued to battle back but fell just short to the Hamshire-Fannett Longhorns 67-60 in Class 4A Region III bidistrict playoff action at Nederland High School Tuesday night.

The Longhorns (24-11) victory offset a tremendous night by Bobcat senior standout Payton Wrinkle, who wrapped up a great run in a Bobcat uniform with 26 points, five rebounds and four assists.

The Bobcats (25-11) dug themselves and early hole against the Longhorns, falling behind 17-3 to start the contest.

“We simply missed a lot of easy shots early on, and Hamshire took advantage of it,” said Bobcats head coach Jake McDonald. “We did our best trying to get back in the game the rest of the way. We cut it to one by the half and got to within three or four in the second half and then they would pull away a bit and go up by 8 to 12.”

The Bobcats rallied with a big second quarter to trim the gap to 29-28.

The Longhorns upped the margin to 10 by the end of the third quarter as they led 45-35 heading into the fourth.

Colin Dorsey and Jailan Ardoin led the Longhorns offense with 19 points apiece, while Jordan Denson had a nice double-double with 15 points and 10 rebounds.

“We hate to see the season come to an end, but the kids battled hard, just like they have all year,” said McDonald. “I’m so proud of our senior group and they helped build a strong foundation. Next year will be heading back to 3A and can’t wait to see what we can do.”

The Longhorns advance to the area round, where they will play Houston Washington.