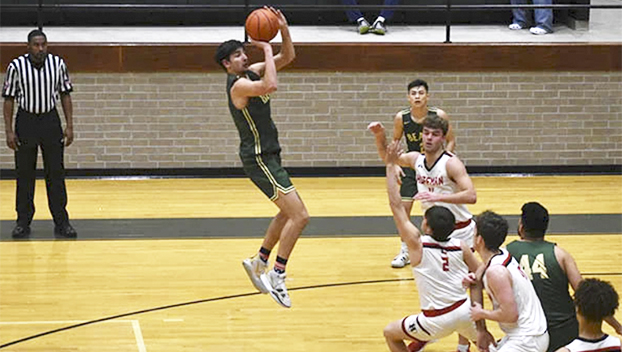 LC-M’s Ben Elliott fires off a jumpshot against Huffman. Elliott had 22 points in the Bear win. (Keagan Smith/Orange Leader)

The two squads were neck-and-neck to start the game, with LC-M (23-11) holding a narrow 6-5 lead halfway through the first quarter.

Senior Ben Elliot was responsible for the entirety of the Bears’ offense in the opening quarter, scoring 10 points. By the end of the first period, the Bears and the Falcons were deadlocked 10-10.

The second quarter of the game played out in similar fashion. Huffman (22-13) and LC-M traded buckets for most of the quarter before the Falcons started to pull ahead as halftime approached.

However, Alantheon Winn hit back-to-back three-pointers for the Bears in the closing minute of the first half, including one at the buzzer. Thanks to Winn’s hot shooting, Little Cypress-Mauriceville held a 20-18 lead at the break.

Once the teams emerged from the locker room, it was a whole new ball game for the Bears. LC-M played great team defense, holding the Falcons to just nine points in the third quarter. Winn had finally found his shot before the half, and he didn’t let up either. The sophomore dropped 12 of LCM’s 18 third-quarter points, helping the Bears mount an 11-point lead, 38-27, heading into the final frame.

Having found their rhythm, Little Cypress-Mauriceville players kept their feet on the gas until the final buzzer. Elliot scored eight fourth-quarter points while Da’Marion Morris contributed seven more. The Bears would go on to win, 59-43.

Winn scored a team-high 24 points for the Bears. Elliot finished second on the team with 22.

Little Cypress-Mauriceville advances to the next round where they will face off against the Navasota Rattlers.