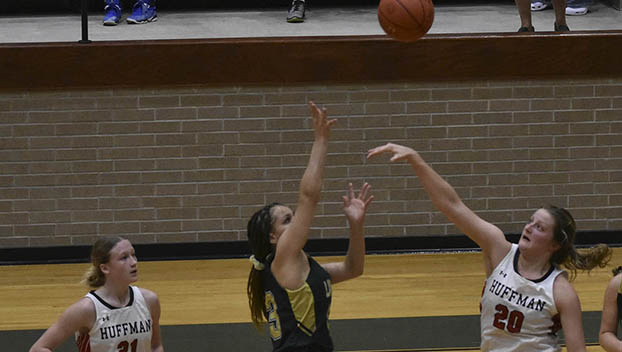 WINNIE – The Little Cypress-Mauriceville Lady Bears’ season came to a close following a 55-46 loss to the Huffman Lady Falcons in the Class 4A Region III quarterfinals Tuesday night at East Chambers High School.

LCM (26-9) looked outmatched to begin the action, but battled back after a rough first quarter.

The Lady Bears and Lady Falcons (25-5) were tied 4-4 after the first four minutes of play. However, a 7-0 run from Huffman got their confidence up. The Lady Falcons rolled to a 20-9 lead at the end of the first quarter.

Huffman scored another basket to open the second period. Facing a 13-point deficit, Little Cypress-Mauriceville started pulling themselves out of the hole they dug.

Asia Robinson scored seven points for the Lady Bears as they went on a 9-2 run. While they brought the score closer, LCM still trailed 28-20 at halftime.

Little Cypress-Mauriceville broke out of a shooting slump following the half. Keylie Washburn scored seven points in the third quarter while Asia Robinson scored six. The third stanza was the Lady Bears’ highest-scoring quarter of the game, but they were still unable to bring the deficit closer than six points. At the end of three, they trailed the Lady Falcons, 43-35.

Facing elimination heading into the final eight minutes, the Lady Bears fought hard but were unable to even the score. Things took a turn for the worse when Asia Robinson picked up her second technical foul, earning a trip to the bench. With one of their top players out, LCM eventually fell, 55-46.

Asia Robinson led the Lady Bears in scoring with 15 points. She was trailed by Washburn, who dropped 12 in the contest.

“We just went out there and got after it to work as hard as we could,” Little Cypress-Mauriceville head coach Eddie Michalko said. “We ran up against a very good Huffman team – very athletic, very skilled at certain positions and they did a great job.”

The Lady Bears finished the season with an overall record of 26-9 and a three-round deep playoff run.

“It was a good year for us. I can’t be upset about it,” Michalko added.