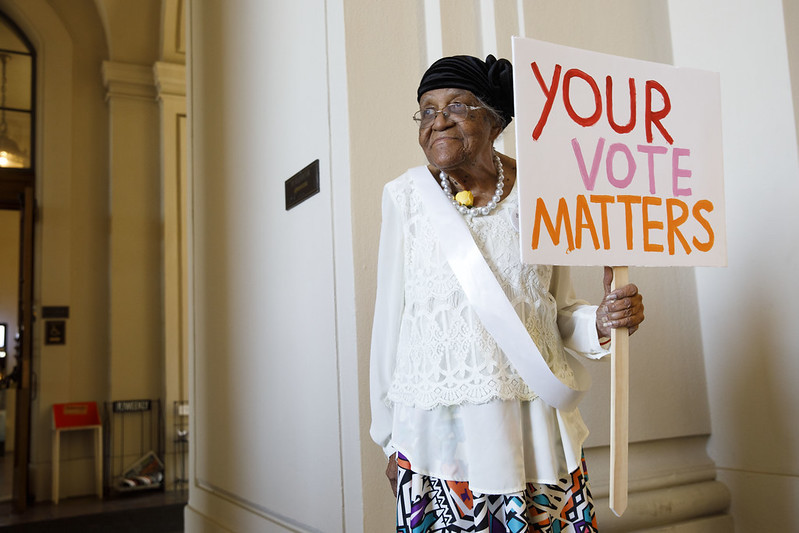 Photo courtesy of lwvk.org Just over four million people, or about one-quarter of Texans, voted in the 2020 presidential primary election.

Election Day 2022 is still nine months off, but Texans already are choosing their candidates in the nation’s first primary of the year, which could be a bellwether for the rest of the country.
John Vasquez, volunteer president of AARP Texas, said there are three ways to vote next month: on the day of the primary, March 1; voting by mail, which has restrictions and requires applying for a ballot; and early in-person voting, which begins in just a few days.
“In-person voting begins February 14th and will go until Friday, February 25th. And your mail-in ballot is due by February 18th,” Vasquez outlined. “If you’re going to do that, you’ve got to move on that very quickly now.”
As far as the governor’s race, there are eight Republican candidates on the primary ballot and five on the Democratic ballot. But the front-runners are current Gov. Greg Abbott, a Republican, and former Congressman Beto O’Rourke, a Democrat.
Vasquez reminded voters unlike some states, Texas holds its Democratic and Republican primaries on the same day.
“You don’t have to be registered for either party. You can vote in either one in Texas,” Vasquez explained. “We have an open-primary system, so you can choose which primary you want to vote in and then, cast your ballot within that primary.”
When it comes to issues affecting older Texans, Vasquez pointed out the primary is important if voters want a candidate who supports addressing their concerns. He encouraged voters who have questions to call their county clerk, or look at the AARP Texas website, which has information in both English and Spanish.
“On our webpage, aarp.org/txvotes, you can find key primary dates that you need to know about,” Vasquez stressed. “And with the information you’re armed, and you’re going to be able to cast your vote, because voting is such an important right that we have as Americans.”
Changes to Texas voter laws include a ban on drive-through and 24-hour early voting, plus new identification requirements for mail-in voting, and stricter requirements when assisting a voter with their ballot.