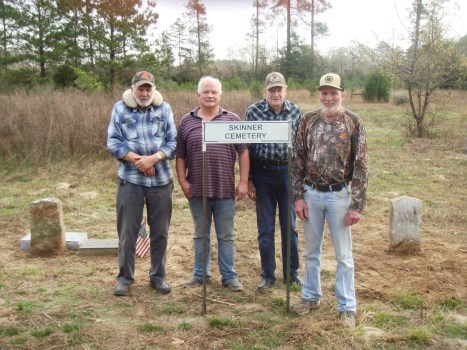 The Skinner Cemetery is located approximately nine miles north of Burkeville, TX on CR 2132.  This is a very small cemetery with only three marked graves; however, several additional graves have been reported to exist but are not marked.

On December 17, 2021 a new granite marker for Nancy Elizabeth Smith Lytle was set in place in front of her old existing sandstone marker.  A CSA military marker for her husband, John Newton Smith, was transferred from Mattox cemetery where it was thought he was buried, but in fact, was buried next to his wife in the Skinner Cemetery.

A third marker is that of William Tanner who also was a civil war veteran.

Joe Clark, who is a great-great grandson of Nancy Smith relates this story regarding these markers.

He quotes:  “I got to be part of something really special yesterday.  Thirty-Five years or so ago, I went with family to an old cemetery (Skinner) that was thought to be where my Great-Great Grandmother Nancy Smith was buried.  As we were looking around, I bumped something on the ground with my foot.  After removing it from the ground, and seeing the name inscribed on it, I realized that it was a sandstone marker belonging to my great, great grandmother Smith.  The plan was to have her a new marker made and to relocate the marker of her husband, John N. Smith to be placed alongside her grave site where he is actually buried.  We made it right yesterday.”

This eventually was accomplished in December 2021.  Family members involved in this effort were John Brooks, Paul Smith, Doyle Smith and Joe Clark.  Ben Lindsey, who is the Cemetery Division Chair of the Newton County History Commission, also provided assistance.

The museum displays many interesting artifacts from the county. A whale bone found in Yellow Bayou, a church lectern from Biloxi dating over 140 years old and a 200-year-old wooden bowl from Ruliff are just a few of the items on display. Contact Newton County History Center by emailing terri.woods@co.newton.tx.us or call 409-379-2109 for information or help with genealogical research. Museum hours are Monday through Friday, 8-4:30.