From criminal justice to cupcakes, Orange man cooking up a dream 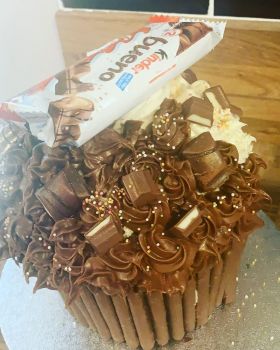 While studying criminal justice and forensic science, a young man discovered a passion for baking when the college held a bake sale.

“I was studying at Lamar Orange when we had a bake sale and Plan B became Plan A,” Darquan Rogers, 23, said.

He always enjoyed cooking, but discovered a hidden talent during that bake sale. The talent led to his startup of Cupcake Empire, LLC.

He hopes with his success will show the younger generation they do not have to be ball players or rappers.

“They do not have to be ball players, rappers, drug dealers or thieves,” Rogers said. “Not all superheroes wear capes and not all businessmen wear suits.”

Currently, he works from home but is hoping to be a step closer to owning a food truck during 2022.

“It takes being dedicated,” Rogers added. “The Cupcake Empire is more than a company or an average startup. It is a movement that symbolize positivity and perseverance being viewed by all generations, regardless of race, religion, health problems or background.”

Rogers, originally from Los Angles, opted to stay in Orange and start his business here because of the ties he made since moving here as a teenager.

“I lost friends during the flood and during COVID,” Rogers said. “I am grateful for the ties I have here.”

Cupcakes Empire, LLC is more than cupcakes, it is also pound cakes, birthday cakes and cookies.

To place an order, visit https://www.facebook.com/CupcakeEmpir3 and click on the book now button or call 409-724-9398. One can also reach him on Instagram at cupcake_empiree