Holly and Oak Kings battle is on 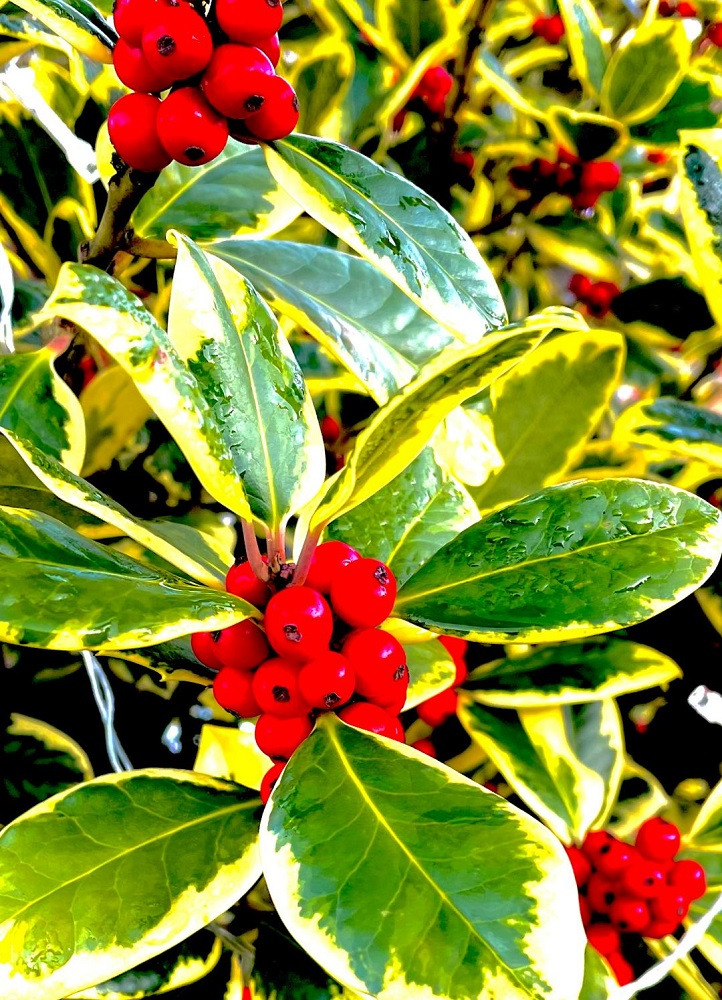 The battle is on between the Holly and Oak Kings! One is losing his life-giving winter berries, the other is sprouting hopeful new flowers.

For thousands of years before we could reassure ourselves that the waxing and waning of el Sol, which influences so many aspects of life, is caused by our planet’s wobbling, the coming of a new solar year has given philosophers pause to ponder the season’s transformative changes.

As soon as we could predict that the long, dark nights of winter would dependably be banished by lengthening days, bringing back Spring and planting and hope, the earliest spiritual leaders in every culture started assigning symbolic value to natural phenomenon. Without getting into ancient Druid fires and Norse yule logs and all that, these highly-anticipated celebrations led directly to the cheer and solace we still get from holiday lights, sprigs of bright red berries, and shared food and gifts.

My favorite garden-related solstice allegory is that of the mythological Holly and Oak Kings who were seen as two aspects of the same being; neither could exist without the other. In a universal theme in which the sun dies and is reborn at the Winter Solstice, the Holly King represents the waning year, and the Oak King of the coming year, and their dominance plays out during both solstices and equinoxes.

Though I don’t buy into those fables, I still planted parts of my midwinter garden specifically with their symbolism in mind. Unlike our frozen cousins farther north, right now we can enjoy flowers, foliage, berries, and even fragrance to keep our spirits high across this otherwise dreary season’s threshold.

Of course we have camellias, both fall-flowering sasanqua and early winter japonicas, in full bloom, plus, due to this unusually warm fall and early winter, more than the usual errant out-of-season others. Paperwhite narcissus nearly always flower by New Year’s Eve, and cold-season blooming winter honeysuckle and eleagnus can be found even at night by their fragrance.

Though there are lots more winter-fruitful plants out there, my best berries right now include holly, pyracantha, and nandina. If yours don’t have a lot of berries, it could be from pruning in the winter, which removes spring flowers; I wait til mine flower before removing just wayward stems and tip pruning new growth to thicken plants up for more berries the next year.

By the way, no, nandinas do not kill birds en masse. The widespread myth is based entirely on less than a handful of isolated events involving only cedar waxwings, which sometimes gorge their oversized craws with fermented, digestible seeds. Really. If it was as serious as alarmists make out, we’d all know about it first hand; still if you don’t want to take the slightest risk, simply snip the berry clusters off next month.

Getting the most out of winter foliage is a matter of contrasting sizes and shapes, and to some extent color. Planting small trees and shrubs with eye-catching differences in leaves makes them all stand out. For example, a Little Gem magnolia beside a feathery nandina, with a soft-tip yucca thrown into the mix, is about as dramatic as anything. Shade gardens can stand out with an occasional fatsia, variegated aucuba, or mahonia (which has showy yellow midwinter flowers). Add even more theatrics with a birdbath, urn, or bottle tree to shine as a winter garden accent.

Walk around the neighborhood, or visit a garden center, and look for bold contrasts that your December garden may lack. And celebrate the Oak King’s newly-unfurling winter flowers while pondering the fate of the poor old Holly King.

Ask Rusty – Should I Take Social Security Even…