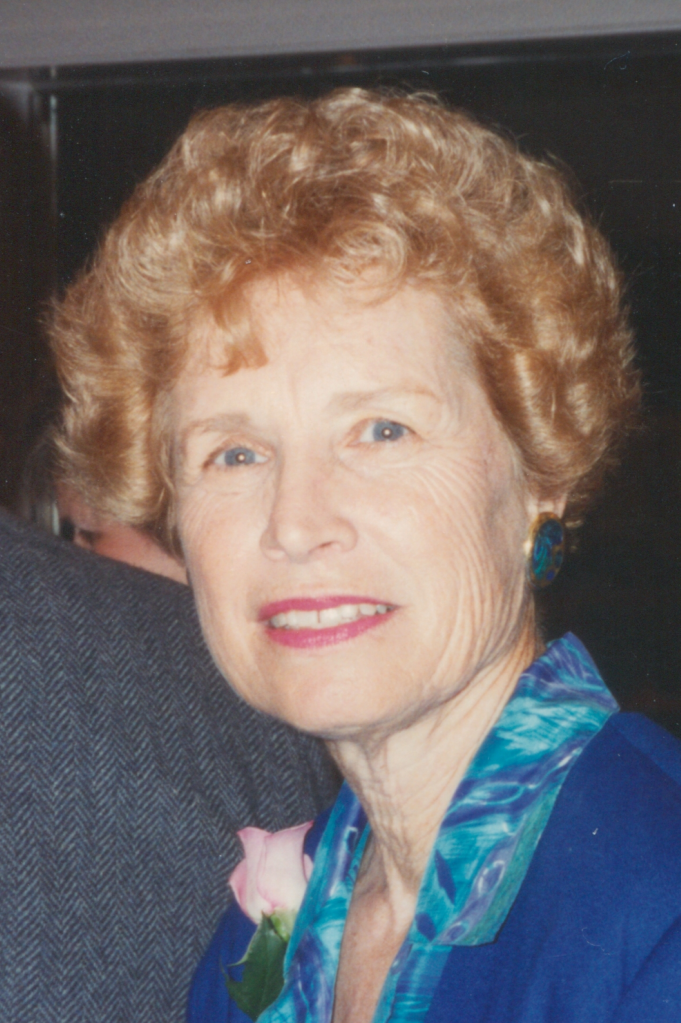 Charlotte “Chockey” Lucille Fuerst Hale passed away on October 29, 2021 at her home in Frisco, Texas. The daughter of Dee Lucile Faurot Fuerst and Edmond Clifford Fuerst was born in Springfield, Missouri on April 27, 1924. She was raised in Salina, Kansas and graduated from high school in Clarinda, Iowa in 1942. She received a Bachelor of Arts in Psychology from The University of Iowa. This began her dual loyalties to The University of Iowa Hawkeyes and The University of Missouri Tigers where her uncle, Don Faurot, was the head footbalI coach.

In 1946 in Clarinda, Iowa, she met and married the love of her life, Paul Hale. While Paul attended The University of Arizona Law School in Tucson, Arizona, Chockey fell in love with the desert, the Navajo culture, and the nature there. After Paul’s graduation, he went to work for DuPont and they made their home in Orange, Texas. Chockey went back to school at Lamar University in Beaumont where she received her Bachelor of Science in Elementary Education. She taught at Oates Elementary in West Orange for 14 years. As an innovative teacher, she started reading circles on the carpet in her classroom and field trips to the Alabama-Coushatta Indian Reservation. After her retirement from teaching, she took her extensive collection of shells and sea creatures to area elementary schools to teach children about the wonders of the sea. In 2012, she donated her collection to Texas A&M University in Galveston and it took two carloads to deliver it all.

While in Orange, she was an active member of First Presbyterian Church serving as a deacon, an elder, a day school board member, a docent for church tours, and a soup kitchen volunteer. As a founding member of the Master Gardeners of Orange County, she served as an officer in the Leaf and Petal Garden Club and a volunteer at Shangri La Gardens. She was an active member of Delta Kappa Gamma and expressed her love of children as an early learning PEEP volunteer and a HOST mentor and tutor. Chockey was also a docent for the Stark House.

In 2014, Chockey moved to Frisco, Texas with her daughter, Patricia, and son-in-law, Keith, to live next door to her granddaughter and her family. While in Frisco, she joined Grace Avenue Methodist Church and its Providence Sunday School Class. She stayed active with yoga classes, gardening, and family. She also became the unofficial grandmother to the neighborhood and baked a constant supply of brownies for neighborhood children. Under the thoughtful and loving care of her granddaughter, Taylor, she had a full and active life, living independently until her death. Chockey was a constant student with a variety of interests, including art, architecture, Native American cultures, Egyptology, English history, mythology, ocean life, plants, flowers, trees, and much more. She loved her family with her whole heart and her many friends, young, old, new and lifelong. She always believed she was exactly where she was supposed to be.

She is preceded in death by her husband, Paul Hale, her daughter, Julie Hale, her daughter, Patricia Weir, her brothers, Johnny and Paul Fuerst, and her parents, Ed and Lucile Fuerst. Chockey is survived by her daughter, Frieda Hale, her son-in-law, Keith Weir, the family of her brother, Johnny Fuerst, her brother Jay Fuerst and his family, her grandchildren; Meredith and Adam Young, Lindsey and Ryan Coates, Taylor and Casey Edwards, and Justin and Beth Weir. She is also survived by her great grandchildren, Hale, Cason, Charlotte, Daley, Izzy, Margot and a seventh due next spring.