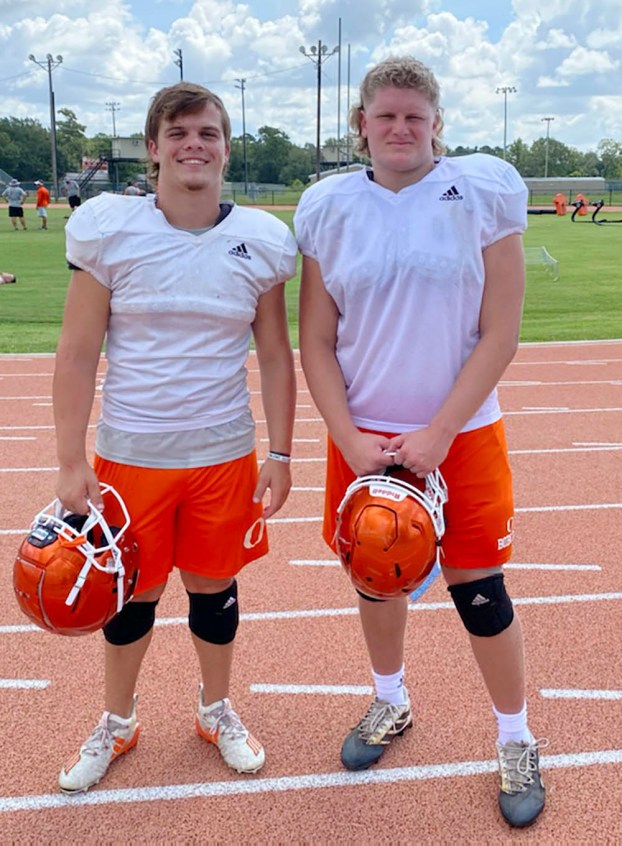 Keagan Smith/Orange Leader Orangefield seniors Brayden Babineaux (left) and Hunter Ashworth (right) will look to make another huge impact for the Bobcats this year as they chase a playoff berth.

Bobcats’ Ashworth, Babineaux ready to shine on both sides of the ball

The Orangefield Bobcats finished fourth in district and squeaked into a playoff spot last season- but they aren’t satisfied. Two seniors are looking to really step up for not only their team, but for their community. Linebacker Brayden Babineaux and Hunter Ashworth filled us in after an impressive practice.

Babineaux is out to make his name known in district, saying, “some of the individual goals I have are making first team all-district and trying to get defensive MVP.”

Ashworth looks to repeat his stellar performance from last season, planning to earn first team all-district for both sides of the ball, and hopefully all-state.

However, both seniors are certainly team players. Babineaux said his goals for the squad are to “win the district championship and try to get past the second round, something Orangefield hasn’t done in a long time. We want to get to a level to dominate our opponents.”

Ashworth echoed that same sentiment: “Same here, we want to make it to that district championship and after that, just take it one game at a time.”

For these guys, leading the team is of the utmost importance. Babineaux explained, “It means everything. All these younger kids look up to us and want to be a leader one day, so we try to set that standard high.”

Ashworth added, “I plan on setting an example for other kids on the team to be a leader. We focus a lot on doing the small things right, and it adds up.”

Sometimes it’s important to step back and appreciate some of the small things off the field, too. “Playing for Orangefield is great. I just really like the community and the people, love all the kids here and the coaches. We’ve got great players and great coaches, and we’ve got what it takes to win games,” Ashworth says.

Babineaux told us his favorite part of playing for Orangefield too- “My favorite thing is probably running out of the tunnel before games. Either that, or doing the fight song and school song after our games.” It’s easy to see that the Bobcat pride runs deep for both seniors.

Of course, every community has been impacted over the last year due to the ongoing pandemic. Babineaux is excited to have a relatively normal senior season, saying, “It means a lot. We don’t have to worry about 50% capacity in the stands and we don’t have to worry about having masks at practice too. Hopefully no more issues with quarantines and all that too. It’s nice to be able to just come out and play and know we’ll be good to come back the next day.”

Ashworth also looks forward to a regular football season without the extra issues. He elaborated, saying, “COVID affected us last year because we couldn’t take ice baths or do anything like that, and it feels better to not wear masks while running too. I feel like us having full capacity in the stands will get everybody fired up, definitely a lot more than last year.”

There’s no doubt about it: the Bobcat bleachers should be filled with fans from the community as they chase another playoff berth. With plenty of returning starters and the guidance of Josh Smalley’s coaching staff, watching Orangefield compete may be a real treat in 2021.

Bobcats getting ‘defensive’ in quest for playoff spot

ORANGEFIELD – After a superb season in 2019 in which they went 9-2 in their last season in the Class... read more