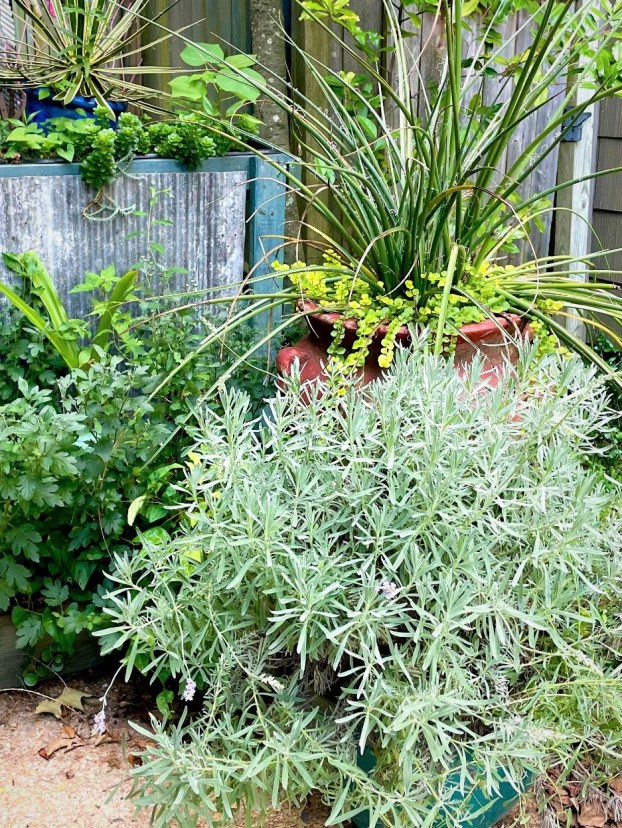 Am I the only one whose lavender is still alive after three years, in a climate known for being mean towards all things Mediterranean?

Not that I’m bragging, because I expect every day to walk out and find its gray-green foliage burnt to a crisp, like what usually experienced by ninety-nine out of a hundred gardeners who have tried before me.

Lavenders, native to dry climates, are grown for their fragrant flowers and foliage, require super well-drained, sandy, gritty soil in big pots or raised beds with only moderate watering; too much rain or watering in our heat quickly rots roots and the plants collapse.

Ditto for otherwise-hardy rosemary and even lantana, both which I have steamed to death with mid-day waterings during summer heat. They, like culinary safe, are overly sensitive to the 1-2-3 punch of too much water, heat, and humidity at the same time.

Another fickle herb is French tarragon, which rarely lives long in Mississippi gardens. Instead, I grow a much hardier Mexican tarragon, actually a clump-forming perennial zinnia sometimes called Mexican mint marigold; its sweet anise fragrance and flavor are similar to real tarragon. It is so tough it grows with zero care on graves in Mexico and Texas, where its clusters of small yellow Autumn flowers prized symbols during Day of the Dead festivities.

All this reminds me of why dogwoods suffer or die when planted in the sun. You know the parable of the Sower of the Seeds? Countless dogwood seeds are dropped every year by birds along fencerows in full sun, but can you remember ever actually seeing one growing wild like that? Nope, because those usually die, leaving only the ones fortunate enough to have sprouted on a slope, in the shade, to survive.

I know, look around and you will see dogwoods planted by gardeners in full sun in flat, clay yards, which give us borderline false hope because of this thing called “survivorship bias” in which what we see is a false impression of reality; our understanding is based only on those we see succeeding.

I’ve learned that those dogwoods surviving in full sun were planted in extra-wide holes with lots of mulch, and understand that every one represents three or four that failed for someone else. We just don’t notice the ones that didn’t make it.

Survivorship bias goes both ways. I get a lot of queries from folks thinking theirs is the only magnolia/wisteria/dogwood/tomato/crape myrtle not blooming. Happens to lots of folks, but we usually only see the ones around town that are blooming, not the ones that are not.

Anyway, this is my fourth try with lavender, mostly because I’ve been sticking with popular English lavender (not actually from England), which is cold hardy to below zero, but melts in our summer heat and humidity.

Better to try the much more heat- and humidity-tolerant Spanish lavender recommended by MSU’s Gary Bachman, a short, wide species with almost goofy rabbit-ear petals atop the fat flower clusters. It is less cold hardy but tolerates humidity much better.

So far I’m getting away with a large potful of a fairly new hybrid named Phenomenon that was brought to my attention by Steve Bender, the self-named Grumpy Gardener who until recently was Southern Living’s gardening guru.

And, in spite dogged determination towards forcing something to grow unnaturally in Mississippi’s climate, I’m resigned for it to die sooner or later.

And when asked how to grow lavender, French tarragon, and fuchsias in Mississippi, or plant dogwoods in the full sun, I’ll continue to gently suggest that basically you can’t. For long.

Dear Rusty: I am getting hammered with taxes on my Social Security (SS). I am retired and draw a meager work... read more