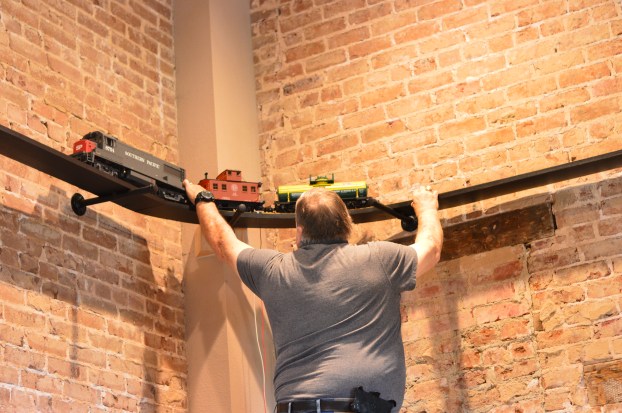 Traveling to other train depots across the country inspired the newest addition of a G Scale model train circling the room at the Orange Train Depot Museum.

The train is mounted on the wall towards the ceiling so it is will be seen by anyone one standing anywhere in the room.

Friends of the Orange Depot Carrie and Ron Woliver saw a similar set up at a depot in Arizona and George Bohn, a model train enthusiast, saw one in a model rail road shop in Florida.

As the train traveled the tracks, Bohn showed that not only will it travel forward, but will also go in reverse as well.

“We are working on having a button installed where a person can push the button and the train will make one lap around the room,” Bohn said.

Bohn and Benny Rhodes worked together to design the layout of the tracks and acquiring the train.

“We did it in collaboration with the Lake Charles Lake Area Model Railroad Club,” Bohn said.

“We also have a tanker to represent Dupont, a lumber car for the lumber industry, a log car for the paper mills and a box car,” Bohn said.

The pipes used to support the tracks was from the suggestion of a club member. It makes the tracks look like they were meant to be there from the beginning.

“We laid the track on the floor and drew out the curves on kraft paper,” Bohn said. “Jack Built, which is now Ironside, built the boxes in the corners for added support and installed the tracks.”

Southeast Texas Model Railroad Club cleaned the tracks as they were installed to ensure safe travels for the train.

“I am really pleased with how it turned out,” Bohn said.

Depot Day, the annual fundraiser sponsored by the Friends of the Orange Depot traditionally held on the first Saturday in May, was postponed because of rain.

This year, attractions include a kiddie train, bouncy house, petting zoo, balloon artist and pony rides.  There will also be musical entertainment by the Orange Community Players and dancing by the Orange Blossom Dancers.

Tours will be conducted inside the depot, where historical exhibits and other surprises will be open to the public.  Since the pandemic limitations, only special events have been held in the depot.

And Now You Know: A disagreement between Russian John and the Bootleggers raises questions

Mike LouviereAnd Now You Know Sometime in late June or early July 1903 an altercation, possibly an assault with a... read more