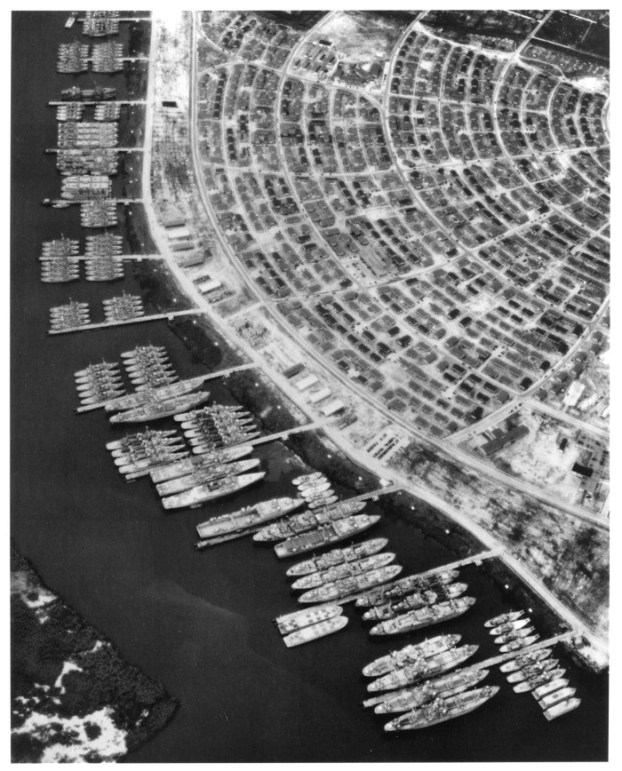 Courtesy photo Riverside was the answer to the need for more housing in Orange during World War II.

And Now You Know: Riverside was a city within a city

Orange was going to have an enormous amount of shipbuilding for the World War II effort, the problem was going to be where to house all the incoming workers and their families. The first workers coming into Orange were taking any type of housing and any other living spaces wherever they could find something. Orange residents with homes large enough to take in boarders were renting spare rooms. Some were able to partition off large rooms to make two or more rooms and rent them. Beds were often placed in large attics and rented.

In extreme cases, two workers on opposite shifts may rent the same bed. One would sleep while the other would be at work.

There was a great need for housing. At some point, entire families would come to Orange and there needed to be places to house them.

The largest residential engineering project ever undertaken in the United States was set to begin in Orange. The federal government acquired 348 acres on the west bank of the Sabine River at Orange to begin building 2,000 houses.

The land was all marsh and swamp. Trees would have to be cleared, along with the heavy brush and any other obstructions to construction. After the land was cleared, the pumping of sand and dredging of mud from the river bottom began. Millions of cubic feet of mud and sand were spread and only partially allowed to settle before pipe for the water and sewer systems were laid on the ground to be covered over by more soil.

Laying the pipe on the ground and covering it over was much easier and faster than having to dig trenches to lay the pipe.

Streets were immediately laid out and constructed without steel reinforcement. The steel was needed for the war effort and could not be used for such a “temporary construction project.”

There was no storm sewer system for drainage. The curb and gutter of the streets were graded along with the pavement to allow the water to drain to the river after a rain. In reality, this was far from adequate method to drain streets. Riverside streets never drained very well and often after only a light rain there was street flooding.

The lack of steel reinforcement and not allowing the soil to settle caused the streets to begin to crack early. As long as Riverside existed, there was uneven paving from broken concrete.

There would be 2,000 houses constructed in the first section of Riverside. Later, there would be over 2500 built in “Riverside Addition”. Both complexes were simply referred to as “Riverside.” By September 1942, the first families began to move in.

The first houses were solidly constructed and built as either one, two or three bedroom duplex units. They would have a small kitchen, living room, and full bathroom in addition to the bedrooms. They were covered with slate or asbestos siding. The walls were not insulated but were finished inside with sheetrock. The floors were polished pine.

Riverside Addition was not so well built. The floor plans were the same, but the outside walls were usually just two layers of sheetrock. They were hastily covered with a rubberized paint before they got wet and started to come apart. Some of the houses had sheetrock covered interior walls, but some had unfinished walls. There was virtually no privacy.

Orange’s population was about 7,000 before the influx of out-of-town workers. The population swelled to over 60,000 while the building boom was happening. The majority of the workers came from rural areas of East Texas. Some were from the farming lands of south Louisiana.

Many of the people were having running water and indoor bathrooms for the first time in their lives. In later years they would remark about how nice it was to have a shower with hot and cold running water, and to have a gas stove in a nice kitchen to cook with.

Sanitation was an early problem in Riverside. There were rural people who had been used to throwing kitchen scraps out the door into the yard. Chickens, ducks, or dogs would then eat them at will. Things were different in Riverside and people had to be taught to carry their garbage to a central collection point.

Riverside was a city unto itself. It had grocery stores, beauty shops, barber shops, a drug store, and a community center. There were provisions made for day care for the children of mothers who worked during the day. There were three elementary schools: (William) Tilley, (Frank) Coburn, and (Grant) Manley. They were named for the first three men from Orange to be killed in World War II. In late 1944, when Donald Manley was killed in Europe, his name was added to his brother Grant’s name and the school became Donald and Grant Manley Elementary School.

The longest surviving public building from Riverside would be the Tilley school building, where Lamar State College Orange had its beginnings in the late 1960s.

When the Navy established the inactive ship facility in Orange, the first two streets, Aulick, and Ausburne that ran alongside the river were cleared of 250 houses and the land was taken to be used for the new navy base.

The City of Orange never accepted Riverside into the city due to the complex not being built to any of the city codes. In 1948, the government sold Riverside to A. Pollard Simon, of Dallas, Texas.

By the 1960s, the decline in the addition had begun and longtime conscientious residents were beginning to move out. The neglect by some of the newer residents and the owners was evident by the 1970s. When Simon died in the mid-1970s, the property was sold to H. R. Management of Houston, Texas. The new owners began to sell off the remaining buildings and by the mid-1980s, the last units had been sold and the area cleared.

There are still a few of the Riverside houses scattered around Orange in various neighborhoods. They are pieces of history which show with care how long something can last. They were built in the early 1940s, only supposed to last 20 years at the most. Some lasted twice as long.