And Now You Know: Getting Ready to Build Riverside 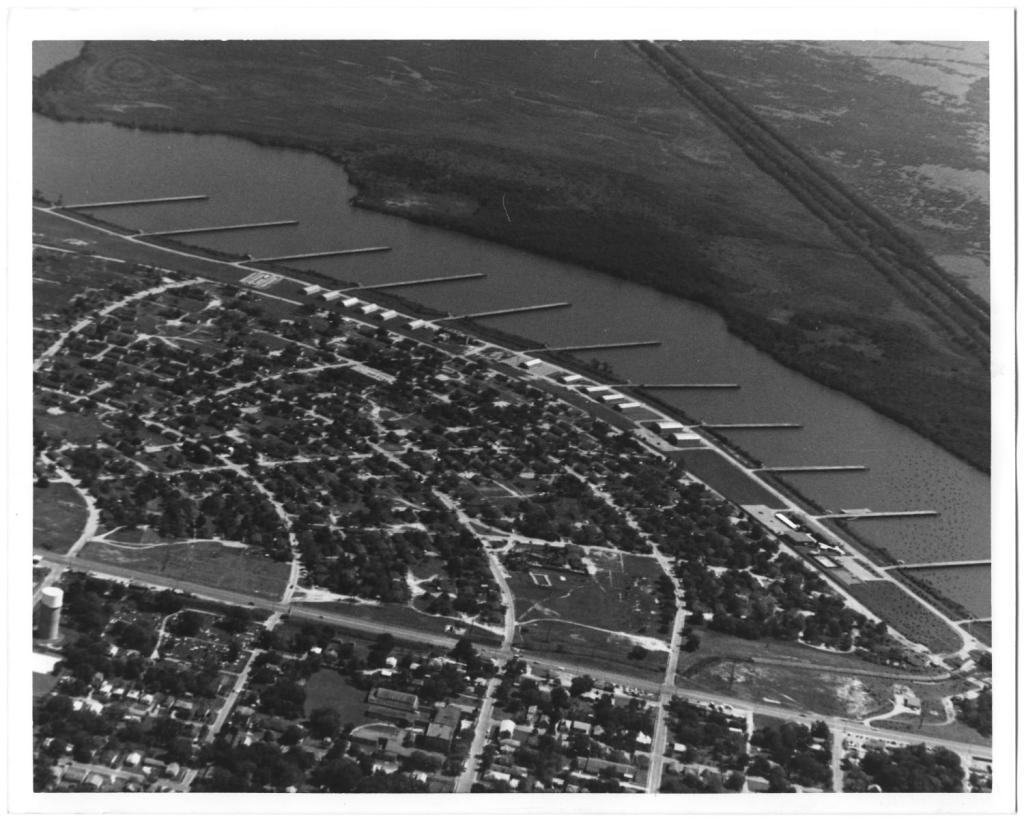 Photo courtesy of The Portal to Texas History Aerial view of the Riverside area of Orange, Texas where the naval housing was located. Berthing piers jut out into the Sabine River. Louisiana is on the far shore. Creator: Unknown. 1950.

June 3, 1942 the Orange Leader published an article stating contracts were being prepared for the building of “Defense Houses.”

Federal housing authorities had announced on June 2 architectural and engineering contracts had been awarded for the construction of 2,300 “Prefabricated Demountable Houses” to be built for the war workers who would be coming to Orange.

The architectural contracts for the construction of 2,000 houses to be of one-, two-, and three-bedroom sizes and types was awarded to the firm of Stine and Pitts of Beaumont.

These houses were to be built on a riverfront site composed of 348 acres. The riverfront site would be land reclaimed by pumping spoil from the Sabine River and adjacent marshes.

The engineering contract for 2,000 houses was awarded to J.B. Converse of Mobile, Alabama and Port Arthur, Texas. Charles P. Smith, Orange municipal engineer, would serve as an associate on the engineering phase of the project.

Three hundred houses would be built on land adjacent to the U.S. Navy addition. The contract for the architectural and engineering work on these houses was awarded to the firm of Page, Brooks, and Livesay of Beaumont, Texas. The firm was expected to sublet the contract for the engineering work. The land the 300 houses were to be built on was not expected to have to be filled in.

Preliminary work on the architectural phases had been started in Fort Worth. Several members of the Fort Worth phase had come to Orange and would involve the city in the final architectural planning.

C.A. Johnson, a member of the architectural group would be in charge of the site planning for the exceptionally large project which would include the city and planning elements of “considerable proportions.”

The Orange War Workers Project would be the largest ever undertaken by the Federal Government.

The 2,000 houses, approximately twice the number of houses in use in Orange previous to the beginning of the U.S. Navy construction yard, would house upwards of 6,000 people.

General plans for connecting the river front addition to the shipyards would be by building streets that would go under the existing Highway 90 bridge. This would eliminate interference with traffic on Highway 90.

It was expected that it would be early July before the river front site would be ready for the construction contracts to be awarded.

The work of building levees around the site would be done by W.D. Streater, a Beaumont dragline dredge contractor. He would be working under a contract with a standard dredging company.

The company was expected to soon start building the levees and filling in the land and reclaiming it.

Construction of the 300 houses would start ahead of the 2,000 homes due to the fact that the land for them would not have to be filled in and it would not take as long to prepare the site.

In spite of rationing, there was a general feeling of optimism for prospects of being able to obtain the materials needed for the project.