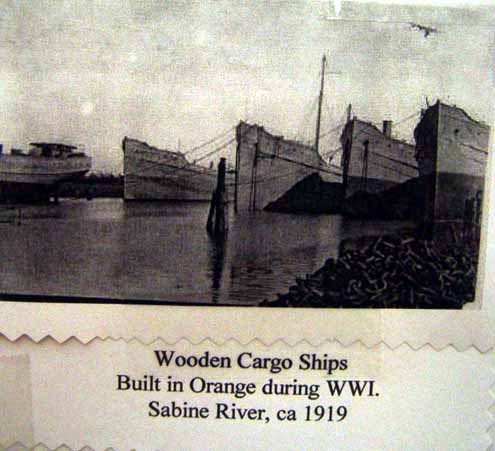 Photo courtesy of http://www.ntxe-news.com/ Front Page, What happened to the City of Bonham, By Allen Rich on Jan 25, 2011

And Now You Know: The World War I War effort in Orange

The United States entered World War I in April 1917. In June 1917, the first American troops landed in France. In 1918, the drafting of men for military service was in effect, some men from Orange had either been drafted or had enlisted and were in France fighting the German army. Sadly, some had been casualties either wounded in action, missing in action, or killed.

The citizens of Orange were becoming very supportive of the war effort.

At the Airdome Theater on May 13, 1918, a very special movie was being shown. “My Own United States” was the name of what was billed as a “Big Vital American drama that makes you glad you are an American.” It was not a battle picture but was “The great answer to the question, ‘What are we fighting for?’”

The distinguished actor Dr. Arnold Daly with a cast of 5,000 made up the production whose aim was to help win the war. The adult’s cost to attend was 13 cents, plus a two cent “war tax” for a total of 15 cents. Children’s admission was nine cents with a one cent war tax, making the total cost ten cents.

Big news in Orange in May 1918 was the launching of the City of Bonham which was the first of 12 large wooden sailing cargo ships ordered by the United States Shipping Board. The Bonham was built according to the Doughtry Plans and was exactly like the War Marvel and War Mystery built by National for the Cunard Lines. Their displacement was 4700 tons. They were the largest wooden sailing cargo ships ever built.

The Bonham was christened by Miss Elizabeth Elliott. Her aide was Miss Mabel Mattox. They were selected by a committee made up of men from the shipyard. Both young ladies were daughters of men who had helped build the ship.

Present at the launching were government officials, representatives of the United States Shipping Board, a delegation from the City of Bonham and a large number of citizens of Orange.

Lutcher Stark had been appointed by the president of the University of Texas, Robert E. Vinson, to serve on a committee formed for the purpose of organizing a University E-Student’s Regiment. President Vinson and many alumni had a desire to see the university form a regiment of infantry reserves.

The American Red Cross was beginning a drive to raise $100,000,000 in contributions for the war effort. W.B. Simmons, Jr. had cleared space in the front of the White Implement Company’s store for office use by the Red Cross. A stenographer would be available to handle what was expected to be a flood of contributions. Simmons was making all other business secondary to the cause of the Red Cross.

The graduating class of Orange High School decided not to issue graduation invitations. Instead, they voted to give the money to the Red Cross. “This is a highly patriotic thing to do. The seniors deserve the commendation of everyone,” wrote the Leader.

A special music service for the mothers of “Soldier Boys” was scheduled to be held by the Salvation Army. “Every mother and any soldier boy is encouraged to attend the service to be held May 12,” stated Captain George, the officer in charge.

Ninety-four men were passed as fit for service by the local medical board with several more to be examined in the coming days. Captain Homer Simmons said the new troop would consist of as many as 105 men but could use more. “Anyone can enlist with the home boys,” said Simmons.

After being recruited, the troop was due to remain in Orange for 30 days before being called to active duty.

(Most of the men from Orange were assigned to either the 141st or 142nd Infantry Regiments of the newly formed 36th Infantry Division. They fought in heavy combat at Forest Farm in the Argonne Forest in a battle that helped end the war in November 1918.)