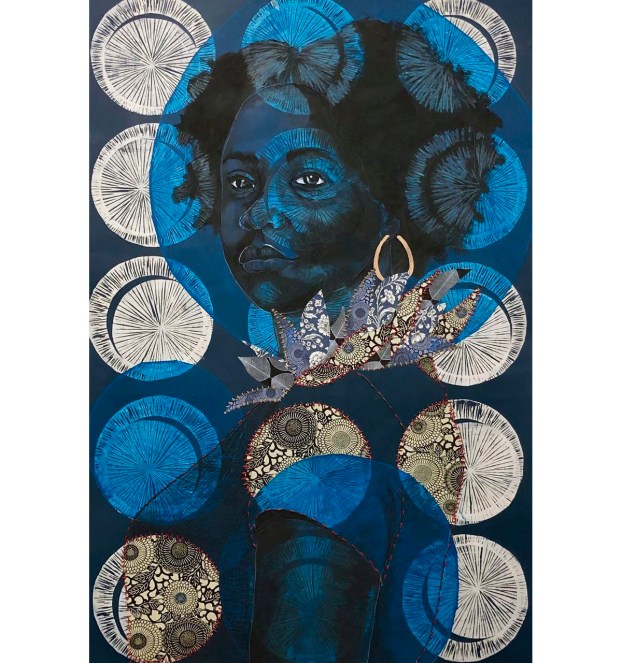 BEAUMONT — The Art Museum of Southeast Texas (AMSET) will exhibit DELITA MARTIN: Conjure on view March 13, 2021 through May 23, 2021 in the main galleries.

Conjure will feature works by Delita Martin, whose art deals with reconstructing the identity of Black women by piecing together the signs, symbols, and language found in what could be called everyday life from slavery through modern times. Martin’s goal is to create images as a visual language to tell the story of women that have often been marginalized, offering a different perspective of the lives of Black women.

Delita Martin is an artist currently based in Huffman, Texas. She received a BFA in drawing from Texas Southern University and an MFA in printmaking from Purdue University. Formerly a member of the fine arts faculty at UA Little Rock in Arkansas, Martin currently works as a full-time artist in her studio, Black Box Press. Martin’s work has been exhibited both nationally and internationally. Most recently, Martin’s work was featured in Calling Down the Spirits, a solo exhibition at the National Museum of Women in the Arts in Washington, D.C. Her work is in numerous portfolios and collections. Delita is represented by Galerie Myrtis in Baltimore, Maryland.

Supporting programming will include a virtual panel discussion at 2:00 p.m. Saturday, March 20th, with the Roux Collective, featuring artists Rabea Ballin, Ann Johnson, Delita Martin and Lovie Olivia. The Collective will speak on the topic of the portrayal of Black women in the arts and will be moderated by AMSET’s Curator of Exhibitions, Caitlin Clay. Joining the panel discussion is free and open to the public. The program will also be recorded and made available on the museum’s website and social media platforms the following week.

By Dawn Burleigh When Dirty Dancing was released 34 years ago, no one realized the iconic movie it would come... read more