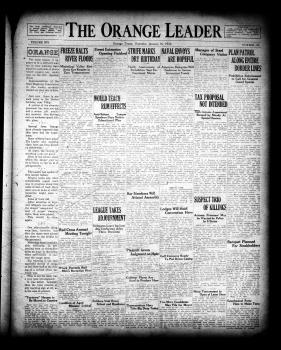 A recent blast of cold weather bringing freezing temperatures to the Orange area and snow just a few miles north brought to mind the winter of 1930. The lingering cold weather made it impossible for Orange truck farmers to grow cabbage and the night of January 15 to early morning January16 saw the thermometer drop 37 degrees.

The high temperature for January 15, 1930 had been 70 degrees. When folks awoke the morning of January 16, the temperature was a cold 33 degrees.

The amount of cold weather that winter was a serious blow to the truck farmers of Orange County. The loss to the cabbage crop was almost 100 percent. Farmers were attempting to replant but were having trouble finding cabbage plants.

The cold weather had not hindered the efforts of thieves who had broken into McLewis School. One night earlier in the week thieves stole two desk clocks and one electric globe light.

On the same night someone, possibly the same gang of thieves broke into the home of Rufus Peveto, who lived near the school. A number of fur pelts were taken from Peveto who was a trapper.

At press time on January 16, no clues to the identity of the guilty party or parties had been found.

A reception for visiting officials of the Southern Pacific Railroad had been cancelled due to a wreck on the main line of the railroad between New Orleans and Orange. The reception was to have been one of only three stops west of New Orleans for the delegation of officials.

An announcement was made that Front Street had reopened on the south side of the switch track as far west as the Yellow Pine Paper Company plant.

Mayor McCarver stated the opening of the street had been much in demand and he was glad to be able to say that it would soon be put into good condition.

The building of a bridge across a slough east of the Orange Box Manufacturing Company plant had just been completed. The bridge had been constructed under the supervision of John Norwood, street foreman. It was expected that the street would soon be graded and shelled.

Other than the cold weather, the most discussed issue was that of the highway department not placing warning signs at the sites of construction and road repair around Orange.

The worst place for damage to a vehicle and possible injury to passengers was in the Neches bottom near Vidor. A section of concrete roadbed had been removed. Several motorists from Orange had reported receiving “severe jolts” when driving at even moderate speeds and hitting this missing section of roadbed.

Some readers had asked the Leader why warning signs had not been posted on either side of this hazard. At night it was reported, the chance of wrecking a car was great. Even if one knew of the bad spot the chance of hitting it was still great.

The Leader had addressed the problem before, some motorists had already hit the bad spot in the road and suffered damage to their cars.

Some signs had been placed but had been placed too close to the break in the pavement. Motorists had found it difficult to avoid hitting the spot early enough to slow down even if driving at a moderate speed of 35 miles per hour.

The warning in one instance had merely been strips of red cloth tied to the railing of a culvert where the break had been.

“This, to say the least, was a very poor arrangement. It was better than the total absence of warning at all, as is the case at present,” wrote the Leader.