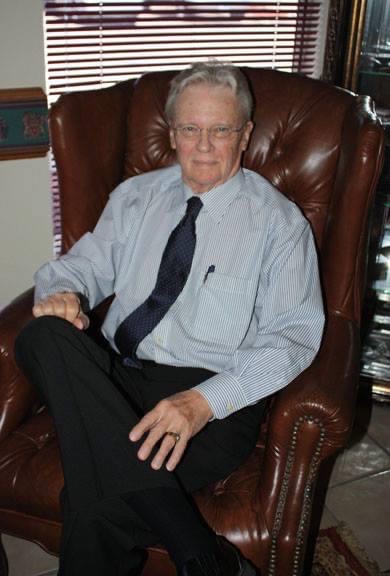 David L. (Larry) O’Keefe was born May 7, 1937 in Knoxville, TN. Mr. O’Keefe was one of three sons born to Raymond Joseph and Phyllis Mae O’Keefe. He lived in Norris, TN, Jamaica, NY, Santa Monica, CA, and Houston, TX. He attended the University of Houston. While attending the university he worked as Director of Parks and Recreation for the city of Bellaire, Texas. After completing college Mr. O’Keefe, a professional singer/songwriter, worked in the music industry until 1970. He served as the National Director of Entertainment for the Marriott Hotel Corporation for two years. Until his death, Mr. O’Keefe was a writer and producer for KFDM TV in Beaumont.

Larry spent a blissful 43 years with the love of his life, Sendy Todaro O’Keefe. He attended St. Mary Catholic Church since 1981 and was a solo vocalist for the church for 36 years. Larry was a member of the RCIA team, and counseled engaged couples. He was a past member of the Parish Counsel, and a Eucharistic Minister to shut-ins. Larry also was a past Board Chairmen of Birthright of Orange where he and his wife served for many years. Mr. O’Keefe is survived by his wife, Sendy Todaro O’Keefe; daughters, Deborah Insch and husband David of Austin, TX, Melissa Gates of Huntsville, TX; brother, Gerald O’Keefe and wife Barbara of Houston, TX; granddaughters, Samantha Lynch and Britney Martin; and brothers-in-law, Billy Berryman and wife Sarah, Wayne Peveto and wife Antionette, Patrick Clark Sr. and wife Rosalie, and John Scofield all of Orange; along with a host of nieces and nephews.

He was preceded in death by his parents, Raymond and Phyllis O’Keefe; parents-in-law, Frank and Sarah Todaro; brother, Raymond O’Keefe Jr.; and sister-in-law, Mary Ann Scofield.

A rosary will be held at 10:00 a.m., August 18, 2020, followed by a funeral Mass, at St. Mary Catholic Church in Orange. Officiating will be Father Joseph P. Daleo. Interment will follow at St. Mary Cemetery in Orange under the direction of Claybar Funeral Home.