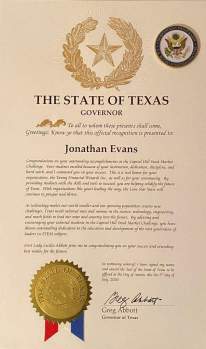 Courtesy photo A certificate of recognition from Texas Governor Gregg Abbott to Jonathan Evans for his part in instructing the students who participated in the Capital Hill Challenge Stock Market Challenge. Each of the three students also received a certificate. 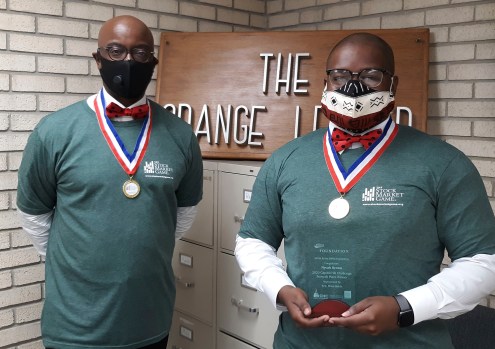 A group of students who initially accepted an opportunity to participate in the Capital Hill Challenge earlier this year have now been recognized by Texas Governor Gregg Abbott.

Mycah Brown, Kaiden Berry and Ryan Landry Jr. participated in a 14-week investment competition that requires public middle and high school teams to invest a hypothetical $100,000 in listed stocks, mutual funds, and bonds. Teams learn the value of the capital markets as they work together to diversify their assets while maximizing the return of their portfolios.

Known as the Capitol Hill Challenge, to be in the competition, the students have to first sponsored by a congressman. U.S. Congressman Brian Babin recommended the trio. Each congressman is allowed to select two teams from their district.

In July, the students were recognized by the governor for their efforts. Each one received a T-shirt, a medal, a tote bag, a $500 gift card and a plaque.

The SIFMA Foundation is dedicated to fostering knowledge and understanding of the financial markets for individuals of all backgrounds. Drawing on the support and expertise of the financial industry, the SIFMA Foundation provides financial education programs and tools that strengthen economic opportunity across communities and increase individuals’ awareness of and access to the benefits of the global marketplace, according to it’s official website.

The students also met with Babin earlier this year where he congratulated them, handed all four their own Congressional Recognition Certificate and a Challenge coin.

Drowning out distractions, as the students met weekly at a local McDonald’s, the group which began as one young lady, Sidnye Antoine-Williams, Mycah Brown, and Kaiden Berry, the group climbed to rank 200 before the COVID-19 Crisis began. Due to circumstance beyond her control, Antoine-Williams stepped down from the group and Ryan Landry Jr., a freshman took her place.

“The team was actually at number 4 but they had a trade that did not do so well on the last day,” Ivory Roberts of Young Financial Wizards, Inc. (YWF) said. “That pushed them down to seventh place.”

YWF is a non-profit 501(c)(3) Financial and Investing organization for 7th thru 9th grade students.

The organization took several years to bring together according to founder Ivory Roberts, originally of Orange and now residing in Houston.

Roberts noticed, while working in finances, there was a trend in how clients traded currencies.

Roberts is an entrepreneur known for founding YFW Incorporated in 2006 and has become one of the top Youth Organization’s in Texas that specializes in K-12 Students focusing on Finance, Investing and STEM.

His organization has made history at the New York Stock Exchange with Private Trading Floor tours for his student in 2014, 2015, 2016 and 2017. Ivory is also a graduate of West Orange Stark High School and a college graduate from the Texas A&M University System.

Roberts explained the reason the top 10 were all considered winners is due to the difficulty the challenge.

“It is so difficult. These students had a 33% gain in 14 weeks,” Roberts said. “Over half the teams finished in the red.”

Mycah Brown, one of the trio, is looking forward to starting classes at Lamar University on August 18. He plans to major in accounting.

In a certificate from the governor it reads:

“Congratulations on your outstanding accomplishments at the Capitol Hill Stock Market Challenge. You excelled because of your dedication, discipline, and hard work….”