And Now You Know: Interesting stories dominate the headlines in April 1950 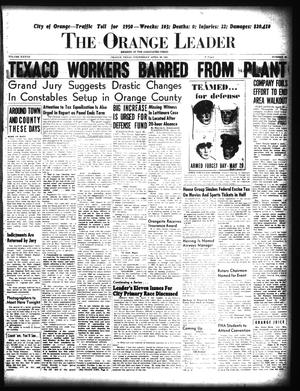 From 1848 until the mid-1970s Texas had a somewhat complicated method of assuring that rural areas or counties with low population had a fair method of being represented. The method was Flotorial Districts, sometimes referred to as “Multi Member Districts”, or “Floating Districts.” In 1955, 36 of the 48 states had these districts in some form. Some states combined counties with low population, some combined parts of two or more counties.

In 1950, Ed Nimitz was a candidate for Flotorial Representative for Orange and Jefferson Counties. Nimitz was campaigning in Hartburg and after several hours of heavy campaigning he discovered that Hartburg, part of Newton County, was not in his prospective district.

Nimitz was not terribly upset, he said; “Well these people do most of their business in Orange County and have plenty of relatives there. Their influence on their Orange County relatives will help.”

He went on to say that if elected, he would help with Newton County legislation.

There were 12 men from Hartburg that said they would help him get votes in Orange County.

Politics was not the only confusion in Orange County that spring. The sheriff’s office also had a problem.

E.B. Collins was being held in the county jail on a charge of theft. Collins claimed that he had already served a term in a federal prison for that offense.

Collins had been arrested in Port Arthur on a year-old charge of theft by bailee filed in Orange County.

Bailee is one to whom Personal Property is entrusted for a particular purpose by another, the bailor, according to the terms of an express or implied agreement.

He was brought to Orange County to stand trial.

In Orange, he insisted that he had been arrested in Louisiana and tried in Marshall, Texas under the Dyer Act and had served a term in the federal prison in Texarkana, Texas.

He was charged with the theft of an automobile.

Officers in Orange said that if Collins’ story were true the charge against him would have to be dropped because of the double jeopardy provision in the Constitution. Orange officers said they would conduct a check with federal officers to determine if Collins’ story was true.

After investigating the case with federal officials, it was found that Collins had been truthful, and he was released.

The sheriff’s department announced that they had arrested two men on a charge of burglary with intent to commit theft.

John Kirby Perry and Robert Haskel Staples, both of Atlanta, Georgia had been indicted by the Orange County Grand Jury for their alleged connection with the burglary of Ramsey’s Bait Shop located at 602 Second Street. Both men were in jail at the time the indictments were served on them.

They were charged with stealing two shotguns, a hunting knife, a quantity of cigarettes, and several other items.

No other persons were believed to have been involved.

A hacksaw valued at $7 was reported stolen from a tool shed at the Norwood Manor construction site. A pedestrian stated he saw three young boys go into the tool shed One boy picked up the hacksaw as the three boys left the shed.

The man said he thought nothing of the incident at the time.

April 1950 was an interesting time in Orange.