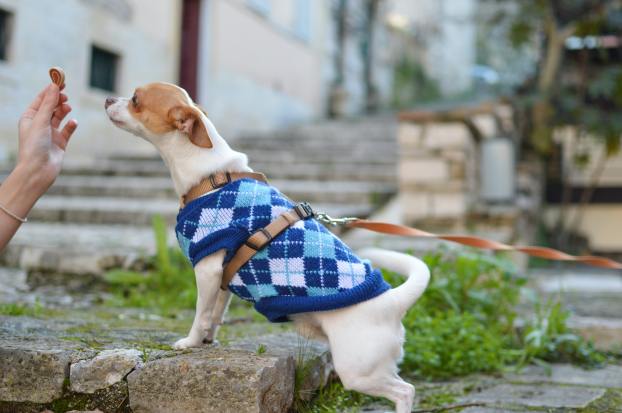 Photo by Tamara Bellis on Unsplash

The Postscript: Meeting dogs and making new friends, one treat at a time

My husband, Peter, and I miss having a dog. I see a lot of dogs on the trail during my daily hike, and so Peter (who is always full of good ideas—usually about things I should do) suggested I carry dog treats.

Dog treats have changed my life.

When I see a dog approaching me on the trail, I say, “Can I give your dog a treat?” Now and then someone will say, “No, she doesn’t need one.” These dogs look to me like they might have a different opinion.

But most dog owners are delighted to let their dog have a treat. “Are you supposed to do something?” I ask the dog, and the owner will say, “Sit!” or “Shake!” and the dog will do a trick. Sometimes the dog offers a paw or sits before she is asked to. “Yeah, I’m supposed to do a trick. I know the drill.”

There are two border collies who barked at me every day as I walked by. I asked if I could give them a treat. No more barking. Now I could go rob their house if I wanted to—as long as I brought treats.

Occasionally, an owner will tell me their dog is fussy and might not like the treat. This is usually not the case. (Peter ordered top-notch treats, and dogs love them.) But there is always an exception.

“Can I give your dog a treat?” I asked a family.

“This is a special dog treat,” I assured him.

“He doesn’t like dog treats, but you can give it a try!”

The dog ran over, put the treat in his mouth, spat it out, and walked away.

“He’s very particular,” his owner said. “He likes chicken livers. But they are so smelly!”

Another man with two dogs told me that the larger one wouldn’t want a treat but the small one, Taco, would. I offered Taco a treat. Taco sniffed it for several moments and declined. The big dog came over and ate it in one gulp.

“I believe your dogs are trying to make a liar out of you,” I told the man. He agreed.

Then I met Wallace. Wallace is a sweet old dog who has to take thyroid medication every day. He was going to be euthanized until his owner, Mike, adopted him. “His medicine costs more than mine!” Mike told me. “But Wallace makes sure I get a walk every day.” I gave Wallace a treat. He let it drop to the ground and looked at me, expectantly.

“Oh. He always gets two treats—of different kinds—then he chooses between the two,” Mike explained.

“I’m sorry, Wallace, I only have one kind of treat!”

Wallace looked at me like he didn’t think I was doing a very good job of this treat distribution business, but he ate it anyway.

I have met rescue dogs who are so shy I have to give the treat to their owner before they will eat it. I have met dogs who refuse to do tricks and say, “Just give me the darned treat and cut out the nonsense, would you?” I love them all.

Now dogs recognize me and tug on their leashes when they see me. I still miss having a dog but now, by the time I get home, my little treat bag is empty and I am filled with dog stories.

“Dog treats!” Peter says. “Wasn’t that the best idea ever?”

5 interesting things you may not know about the Peace Corps

(StatePoint) A lot has changed about the world since the Peace Corps was founded nearly six decades ago, but its... read more