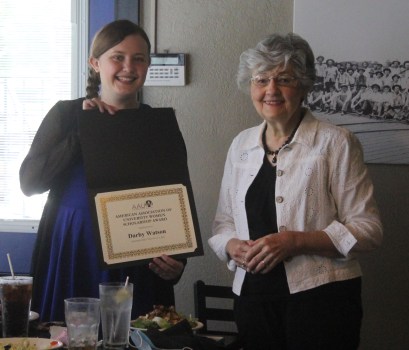 Dawn Burleigh/Orange Leader Darby Watson is presented with a certificate and a $1,000 scholarship from Orange Chapter of American Association of University Women on Wednesday at Old Orange Café. 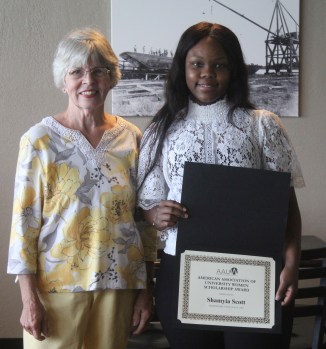 Dawn Burleigh/Orange Leader Shamyia Scott is presented with a certificate and a $1,000 scholarship from Orange Chapter of American Association of University Women on Wednesday at Old Orange Café.

Two students stood out in the applications received by the Orange Chapter of American Association of University Women (AAUW) for the two scholarships granted each year.

AAUW board members honored Darby Watson of Little Cypress-Mauriceville High School, and Shamyia Scott of West Orange-Stark High School at a luncheon on Wednesday at Old Orange Café. Due to COVID-19, only the board members of the organization were present along with the students and their parents.

Each young lady was presented with a certificate and a $1,000 scholarship.

The numerous applications are reviewed by AAUW Scholarship Co-Chairs, Joan

Each year, AAUW gives an outstanding female senior from LCMHS, as well as from WOSHS, the special academic award.

Watson received word of the award during the shutdown due to COVID-19.

“It was a nice surprise,” Watson said.

Watson is the daughter of William and Jennifer Watson of Little Cypress.  She plans to attend Sam Houston State University in Huntsville and major in Music Therapy.

“Through experience I have seen how music can be therapeutic,” Watson said. “I was told I would be in a wheelchair by now and obviously, I am not.”

She served the LCMHS Battlin’ Bears Marching Band as Drum Major her senior year and earlier as Band Librarian and Horn Section Leader.  She has also played the piano in her church praise band, while participating in dance training.

Watson said she wants to eventually work in a children’s hospital in order to help children either recovering from trauma or those with disabilities.

“We are still waiting to hear if it will be in class or online only,” Scott said.

Scott was an athletic trainer while in high school.

“I fell in love with it and found out it was a career,” Scott said. “I love sports, even though I am not athletic. I love watching them.”

Scott said her senior year was moving along great until the pandemic struck.

“I was looking forward to the senior prom and had my dress already.”

Two days prior to graduation, she found out she was named Miss WOS.

Scott is the daughter of Kimtress and Kerry Scott and is a first-generation college student.

AAUW is a non-profit organization just over 100 years old.

The main philanthropy is the two scholarships each year.  It’s major fundraiser is annually at The Art in the Park, selling used books on the porch of the Lutcher Theater.  The fundraising event has been canceled the last two years.

This year’s Art in the Park has been rescheduled for the first Saturday in October.

AAUW also provides books for The North Early Learning Center and participates with the Friends of the Orange Library and the City of Orange Public Library in the Library Family of the Year Program.

“College girls can join the group,” Anne Payne said as she gave a brief history and purpose of the organization at the start of the event. “It is also something to put on the resume.”

The organization welcomes all new members.

The organization also holds a Book Club meeting once a month as well as participant in the Galloping Gourmet.

“We try out different restaurants from Lake Charles to Beaumont each month,” Payne said.