And Now You Know: Bob Axelson’s opinion about saving the old courthouse 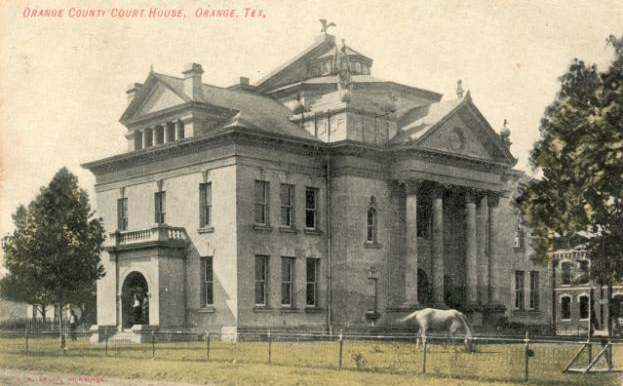 In October 1954, the old Orange County courthouse was still standing. It was not in particularly good shape. There had been discussion about saving the old courthouse. Orange Leader reporter Bob Axleson in his weekly column, “Postscripts to the News” gave his opinion about saving the building.

Axleson was a writer who gave his honest opinion, he was often blunt and to the point, he took a stand and did not back down. He stated his opinion and did not care about how it was received. This column may have ruffled a few feathers.

“Where does one draw the line between sentiment and practicality,” was his opening.

Axleson then wrote that the courthouse was a dilapidated old building that had been condemned not once but several times over the past several years.

The courthouse had been completed in 1899 and was, according to Axleson, the only standing historical link with the past.

“From the standpoint of tradition many Orange County residents regard it as a symbol which should be preserved for future generations,” he wrote.

County commissioners were planning to dispose of the building at a public auction on the steps of the courthouse on November 28. They had made the choice based on practical considerations.

“Upon publication of this intention (the auction) a hue and cry was heard in the distance. As Nov. 28 nears you can be sure this will result in a flurry of petitions from indignant citizens determined to ‘save our old courthouse’ for posterity. Right now, these protests are unorganized squeaks, but rest assured the chorus will merge into a lion’s roar,” he wrote.

A suggestion had been made to renovate the first floor to a public library and the second floor as a museum for the display of Civil War relics and artifacts of the Orange County pioneer era.

Axleson raised a question about what it was that those wanting to save the courthouse were wanting to saddle the current generation with.

“It’s a rat hole…Yup, a rat hole where I wouldn’t even send a half-way respectable rat…and I’m not a rat lover. I wonder if those who are forming the ‘Society for the Preservation of the Old Courthouse’ replete with slogans would take the time and trouble to tour this historical link with the past. Actually 15 minutes would be enough and make sure your life insurance is in full force and effect,” he wrote.

At this time plaster was peeling off of the walls and exposing brick on the second floor rooms, sagging floors were commonplace, and along the wall of a staircase there was a “gaping crack” eight feet long through which the next room was visible. Axleson wrote that cut up into tiny rooms the renovation would cost more than the building was worth.

The only occupant of the courthouse at this time was Paul Miller, Justice of the Peace, and he wanted to get out.

Miller was working out of a dingy office in the northeast corner that had once been the location of the sheriff’s department. Miller called his office a disgrace.

When asked when the building had been condemned, Miller answered by saying, “which time and how long ago?”

The Resident Engineer’s office of the State Highway Department had once been quartered in the old courthouse. Personnel vacated the building when heavy chunks of plaster fell from the ceiling and crashed onto their drafting desks. They moved into new quarters on MacArthur Drive, “eternally grateful, even today, that they escaped alivem,” wrote Axleson.

Axleson concluded his column by writing, “You old timers can have your old courthouse. I’ll take a nice level parking lot on the site of the old building and try to forget how the old shack used to look. If I want to see Texas historical mementos, I’ll travel to the state museum at Austin. Even with the highway fatality rate, believe me, it’s safer.”

Some of Axelson’s words may have been harsh, but he made a good point in stating that often those who raise a “hue and cry” about saving old buildings do not consider what is involved in saving an old building that may not be in a condition to be saved. At times practicality has to override sentiment.