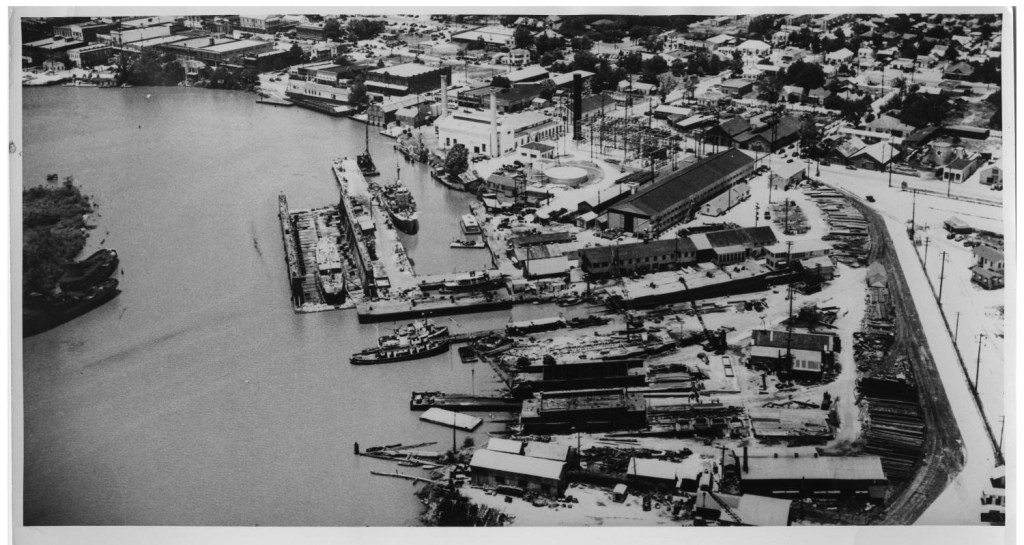 Levingston Shipbuilding Company had a long history of building almost anything that could float.

Captain George Levingston started the company in 1859. The first records start at the location on Moss Street in 1919. Sixteen vessels were built there.

The shipyard relocated to Front Avenue in 1931 and built 11 vessels, then the Levingston Shipbuilding Company was created, the yard expanded and from 1934 to the closure of the yard in 1982, an additional 760 vessels were built.

In 1965, three of the most unique vessels were launched, they were some that those who worked in the yard took a great amount of pride in having built. They were ferry boats built under a contract with the City of New York.

Of the three Kennedy Class ferries, the John F. Kennedy is the only one remaining in service.

The first ferry that Levingston built was one of the first self-propelled ferries. Prior to this ferry most ferries were barges lashed to the side of small tugboats.

The ferry was of all steel construction, and self-propelled, powered by two Atlas 200 horsepower diesel engines. The vessel was 132 feet long, 42 feet wide, and had a 12-foot draft.

She was built for CIA. Anon. Transportes. “La Translacuster” of Maracaibo, Venezuela. The ferry had been christened “Coquivacoa” at her launching. She was believed to be used in the coffee trade.

The first round of sea trials was held on January 4, 1939. Captain Belez arrived from Venezuela to conduct a second round of trials and take command of the vessel.

The second round of trials was conducted on February 2, with a number of Orange citizens aboard. The trials were satisfactory, and the ferry sailed from Orange on February 5,1939 for her home port at Maracaibo.

The Venezuelan company was so pleased with the work Levingston had done on the “Coquivacoa” that over time five more ferries were built.

The sixth ferry, “Caroni” launched on January 31, 1960. Its length was not recorded.

Ferry boats were in the middle of the vessels that Levingston built. Some were as simple as barges to carry liquid cargoes; some were as complicated as drill ships and deep-water drilling rigs for offshore oil production. Whatever was needed for the marine industry, Levingston had engineers that could design it and workers that could build it.