And Now You Know: Leonard Benkenstein: Oil, whiskey and cigars 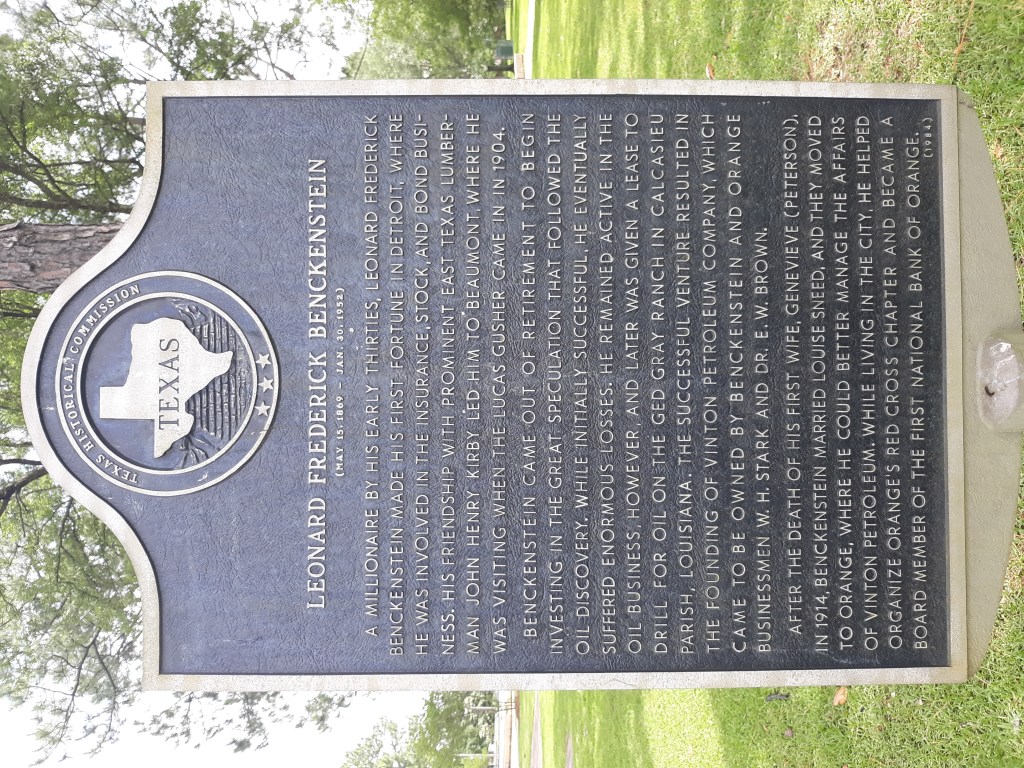 It has been well documented that Orange in its most prosperous times had a number of timber barons who made millions of dollars wheeling and dealing. There were also a few who made fortunes in the oil business. The most flamboyant of these men may have been also one of the least known, Leonard Benkenstein.

Legend has it that Benkenstein would seal a deal with a bottle of whiskey. He also thought he looked “darn good” holding a cigar.

Benkenstein lived in Detroit and became successful in the insurance and stock and bond business. By his early 30s, he was a millionaire and retired from business.  He enjoyed hunting, fishing, and traveling on his luxury yacht, “Roxanne”.

He got caught up in the excitement when the Lucas Gusher blew in and the Spindletop oil field became a boom.

He came out of retirement and bought leases at Spindletop and drilled wells. As soon as they were flowing, he would sell them. He would drill and sell more wells and buy wells from other oilmen.

He drilled the first successful well in Evangeline, Louisiana. The well came in with 21,000 barrels and flowed over one million barrels.

For a while, he operated under the name of Bass and Benkenstein. Later he formed the Evangeline Oil Company in partnership with Sam Carnes and T. H. Bass.

With John Donahue, he established a refinery in Port Neches. The operation was a disaster. Eastern Oil Interests bought out his partners interests and his production at Spindletop ceased.  He was broke and hopelessly in debt.

He moved to Beaumont and hired attorney J.S. Wheelus to prepare a voluntary bankruptcy petition. He then refused to sign the petition and as a result there were lawsuits filed against him for debt. He contested none of them and judgements were filed against him. Over a period of years, he was able to pay off the debts and settle the judgements.

He heard about the possibility of oil on the Ged Gray Ranch near Lake Charles. He visited Gray at his home paying his expenses using money he won playing pool at the Crosby Hotel in Beaumont.

Benkenstein told Gray he wanted to lease 20 acres of the ranch and offered to discuss the deal over a bottle of Cascade whiskey he had bought with his pool winnings.

Gray was also a fan of good hooch.

Gray said, “Let’s seal the deal and get back to drinking this good whiskey.”

Gray agreed to loan Benkenstein money to form and promote the Vinton Petroleum Company of Texas. The discovery well came in and there was cause for celebration with more whiskey and good cigars.

He found he was about to lose the company because others were about to gain control through stock ownership. It was then that he contacted Orange tycoons W.H. Stark and Dr. E.W. Brown and convinced them to buy up the stock. Benkenstein, Stark and Brown would own the company.

At the urging of Stark, Benkenstein moved to Orange in 1914. The family moved into a home at 601 Cherry Street.

During the first 30 years of the lease, Leonard along with his son Charles produced millions of barrels of oil, probably more than one individual operator in this section of the country ever produced.

Benkenstein’s son Charles managed the company until his death, then the third son, Alfred George, operated the field until his father’s death.

Benkenstein also helped organize Orange’s Red Cross chapter and was a board member of the First national Bank of Orange.

Leonard Benkenstein died January 20, 1952 at age 85. Funeral services were held at his home at 711 Green Avenue. He was buried in Magnolia Cemetery in Beaumont.

On Friday September 1, 2000, a Texas historical marker was dedicated in his honor at Stark Park in Orange.