And Now You Know: Orange’s Holland Hotel – one of the finest in the South 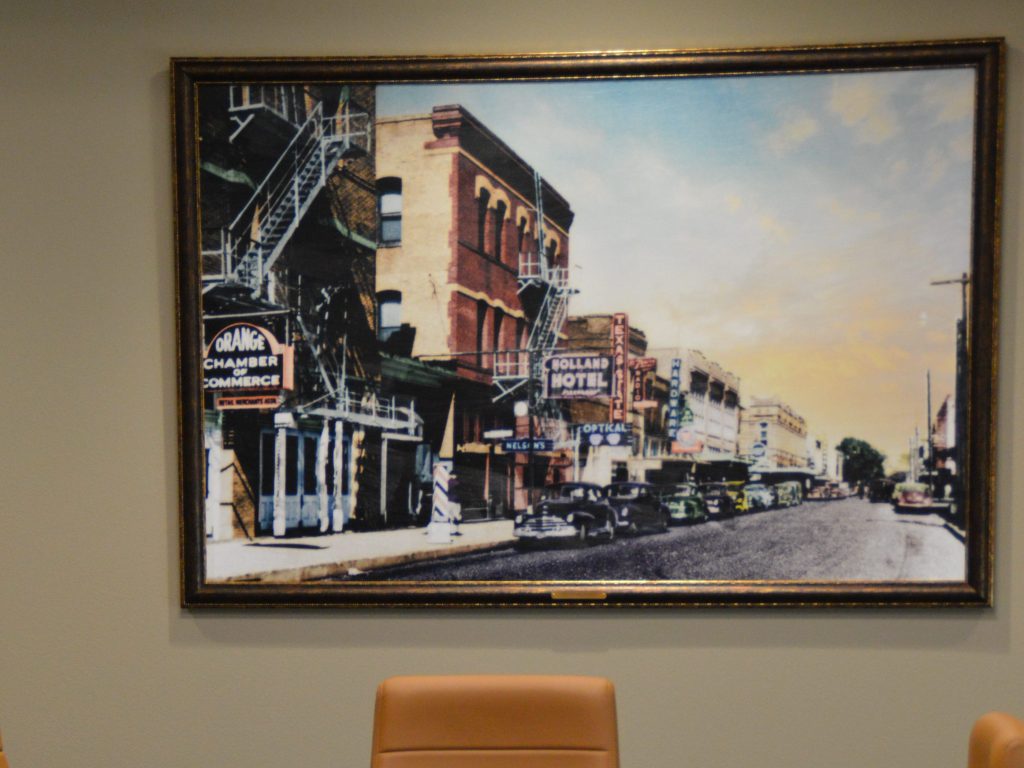 A picture of the Holland Hotel, the first home for the bank, hangs on the wall in the conference room at First Financial Bank.

As the lumber industry developed in Orange and sawmills and shipyards flourished, business deals were conducted nearly every day with men coming into Orange from out of town. In most cases, they were successful men who wanted to stay in the better hotels. They did not want to stay in a boarding house or a hotel that only had the bare bones. They wanted soft beds and good food. Orange, for all its wealth was lacking in available luxury hotels for the wealthy businessmen and travelers.

Those coming to Orange to deal with the timber barons and others of wealth often had to stay in their private homes. Around the turn of the 20th Century that began to change.

Mayor J.W. Link had begun to improve the city in 1900 by paving the streets with clam shells; the initial installation of utilities was beginning.

Prominent citizen and businessman Charles M. Rein made a trip to Chicago in early 1900 to visit his friend Colonel William S. Eden. Eden had developed, and for 10 years, operated the Great Northern Hotel in Chicago. The Great Northern required the services of over 500 employees for its operation. It was a large first-class hotel with a national reputation. It had over a dozen buffets, bar rooms, and cafes to serve its clientele.

Rein and his friends envisioned such a hotel in Orange.

Rein convinced Eden to accompany him back to Orange. Together they enlisted Burt McDonald, who had designed hotels in Chicago and other large cities to work on the hotel in Orange. Eden would be the head of construction.

The chosen location was at the foot of Fifth Street and Division Avenue, near two railroad depots and the Sabine River. The Opera House was across the street, the courthouse was nearby. It was the best location in town for a fine facility to stay in and to conduct business. The name chosen was the Holland House Hotel. Over time “House” was dropped from the popular vernacular and it would be known simply as the “Holland Hotel.”

Construction took nearly two years and on November 1, 1902, the grand opening was held.

The building covered one half of a city block. There were 108 rooms. All rooms had long distance telephones, and electric fans, there were nearly 1,000 electric lights in the building, and 60 of the rooms had private baths. Halls were wide and the grand staircases were spacious. Every room had a marble washstand with hot and cold running water. The newest locks, manufactured by Corbin Lock Company, were installed to give the guests safety.  Every floor had fireplugs and fire hoses, to provide the latest in safety in case of fires. Every effort had been made to provide all that could be done for the comfort of the guests and to make the Holland Hotel not only the best hotel in Texas, but also equal to any other in America. There were two grand rotunda entrances on Fifth and Division streets.

In the Victorian Era, women and men did not socialize as they do in the present day.

A ladies café, 40 by 70 feet was provided for their use. The view overlooked the Opera House. There was a barbershop, billiard room, and club room for the men. Spacious show rooms were provided for the traveling salesmen to display and sell their wares. Also were several buffets in addition to the grand dining room.

“Col. Eden has brought in one of the best known chefs in the country from Chicago. He has also brought cooks from that city and St. Louis. The steward, Mr. Ellison has been with the Great Northern for years, as has Mr. Splain, head of the Great Northern barrooms. These gentlemen are in Orange aiding greatly in organizing the help, much of which has been secured locally and had to be trained to high efficiency,” stated a brochure from the hotel’s opening.

The brochure went on to give an accounting of the procurement of furnishings from Europe and New York. Only the finest linens would be used, mattresses were of the highest quality available, there would be art and sculpture in the lobby, hallways, and other public rooms. Every effort was made to make the Holland such a grand hotel that there would be so much returning business and word of mouth advertising that it would quickly be a financial success.

The vision of the builders was that a line of steamers would bring in travelers by the river in addition to those coming into Orange by rail and that the proximity to the Gulf of Mexico and the fine hunting and fishing in the area would bring in sportsmen as well as businessmen.

Over the years, there were many fine balls held with elaborate dresses by the ladies and evening dress for the gentlemen. As times changed, women began to frequent the lobby and other downstairs spaces. A variety of organizations, including high school clubs and civic groups began to use the facilities.

Governors and senators, and other prominent speakers were invited to address gatherings, conventions were held.

The vision of Rein, Link, and Eden had been achieved.

The Holland Hotel was well known and considered one of the finest places to stay in the entire south, the equal of any hotel in Mobile or New Orleans.

The original design consisted of red brick and turrets. Remodeling began in 1949 and in 1950 the hotel was re-opened as the New Holland Hotel and given a white stucco appearance. Things were changing in Orange; the sawmills had disappeared, and chemical plants were being built. Orange needed a more modern hotel for the new breed of travelers.

The Jack Tar Hotel chain opened the Jack Tar Orange House in 1957. The new hotel was built on the river on Division Avenue across from the Holland.

Shortly after the opening of the Jack Tar, the Holland was demolished. The site was cleared, and the new hotel used the site of the old hotel for a parking lot.

The site of the old Holland Hotel has regained use as a new senior citizens center. After a few decades of inactivity, the old hotel sites are once again serving the public.