And Now You Know: Kichimatsu Kishi was founder of the Kishi Colony 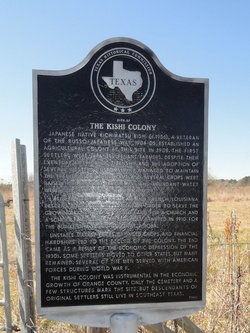 The houses and barns are gone and the fields are fallow, but this was once the land that grew crops from rice to strawberries and even had a profitable, though short production of oil.

Kichimatsu Kishi was born in Nagata, Japan in 1872. He was an ambitious young man that wanted to accomplish more than he felt he would be able to in his homeland, so he left Japan in 1907 with his second wife, Fuji, and young son Taro and migrated to America.

Kishi eventually settled in the community of Terry, located between Orange and Vidor. He had encouraged 16 other Japanese men to move to Texas and they began preparing 1600 acres for cultivation.

The first order of business was to dig irrigation canals from Cow Bayou to the fields. Levees were constructed to hold the water and the plowing and planting began. In the 1908 harvest, the sale of 15,753 sacks of rice weighing 200 pounds apiece brought $47,000 income to the new colony.

Saltwater invaded the rice fields. The colony needed to diversify its crops.

By 1920, the crop production included cabbage, potatoes, onions, corn, cucumbers, spinach, celery, tomatoes, lettuce, carrots, beets, and strawberries. It was also about this time that oil was discovered on the portion of the land near Orangefield.

The east edge of Kishi’s land was on the deep salt dome that would produce the Orange oil field boom of the 1920s. The discovery of oil made Kishi a millionaire practically overnight and enabled him to pay off all of his creditors and he began to buy more land. He would eventually own 9000 acres.

Taro graduated in 1926 with a degree in Agriculture and returned home to help his father farm.

Count Kojiro Matsukata, president of the Kawasaki Dock Company had made a large investment in Kishi’s oil venture and the Orange Petroleum Company had been created. The land was leased for drilling to the Gulf Production Company, The Sun Company, and Humble Oil and Refining Company.

At its peak, the wells produced slightly in excess of 400 barrels per day.

Additional oil was never discovered, and the wells began to slow production in 1923 and by 1925 production had nearly ceased. Financial problems for Kishi began because of the notes due on his large land purchases.

In 1924, several officers of the Japanese Navy had toured Europe and America to view the state of military affairs. One of these officers was Commander Isoroku Yamamoto was from the same hometown as Kishi and brought his delegation to Orange to view the Kishi oil field and to see how the Orange Petroleum Company was organized and run.

On his return to Japan, Yamamoto tried to interest the Nippon Oil Company to consider American operations. They were not interested.

Yamamoto later became the admiral who was the architect of the attack on Pearl Harbor.

In 1925, the Orange Oil Company was no longer profitable.

Kishi’s finances were so depleted that he made trips to Japan to try to borrow money to stay in operation with his farming ventures.

After the start of World War II, the remaining interest in the Orange oil properties were seized under the Alien Property Custodian Act and sold to the Kilmarnock Oil Company for the sum of $1.

Kishi was an American patriot. Japanese was spoken in the home, but outside the home English was the language. He wanted his son and daughter to be familiar with American customs and history and be proficient in the English and Japanese languages. Taro and his sister Tokiko had both attended public schools and the family attended the Methodist church.

The Monday morning following the attack on Pearl Harbor, Kishi went to Port Arthur and turned himself in to the FBI. He wanted to show that he was a loyal citizen of the United States.

When asked if the Emperor ordered him to bomb a refinery in Port Arthur, “would you do it?”

He answered, “I am a businessman and a farmer and know nothing about explosives. Suppose I was adopted into another family and was ordered to harm them would I do it? I could not do so.”

Later the U.S. Attorney told Taro that his father “had answered all of our questions magnificently.”

Kishi was sent to Camp Kenedy, near San Antonio for an internment period of only two months. The probable reason for his internment was due to his relationship with Yamamoto.

Orange residents Lutcher Stark and J.O. Sims were quick to vouch for Kishi’s character and patriotism and requested his release.

The only other action taken was that the Kishi family had to surrender their firearms and cameras.

Over time, Kishi’s acquisition of land became his downfall. He had more acreage than he could pay the taxes on. As a result, he began to lose his holdings until about all he had left was his original homestead.

They are buried along with 20 other members of the Kishi Colony in a small cemetery located on the original Kishi tract.