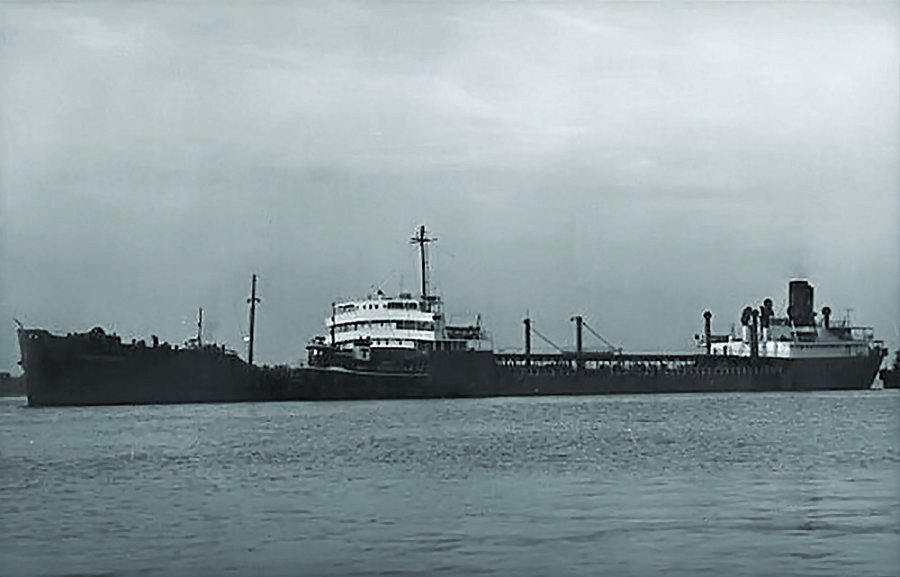 Anyone in a boat or in sight of the ship channel between Orange and Sabine Pass on Sunday, April 5, 1959, would have seen an unusual sight.

There were two tugboats towing an unpainted section of a ship. One’s initial thought may have been that this was a section of a junked tanker going to a scrapyard.

The rusty piece of a ship was actually a newly constructed mid-section of a tanker. It was built at American Bridge for a process called “jumboizing”.

American oil companies at this time owned their own fleets of tankers to haul crude oil to and finished products from their refineries. The tankers currently in use were the T-2 Class that had been built mostly during the World War II years.

The jumboizing procedure had been devised to increase carrying capacity without having to bear the cost of building a new tanker.

The section being towed down the ship channel this Sunday was a new midsection, one of two, built at American Bridge under contract with Maryland Shipbuilding and Dry Dock Company.

Jumboizing the tanker would be done at the Baltimore, Maryland shipyard of the company.

The sections built in Orange were for two tankers belonging to the Texas City Refining Company.

The cost to the company to jumboize the two tankers was about six million dollars.

The cost of one new tanker to replace a T-2 Class tanker could be as high as nine million dollars (1959 dollars).

The two tankers were about 12 years old.

Every four years they had to undergo rigid inspections by the Bureau of Shipping. In their current state, it would have cost as much as one million dollars to bring them up to standard.

The midsection for the Four Lakes was laid on June 17, 1958, and launched four months later. It arrived the following December at the Baltimore yard for the refitting.

The Four Lakes was increased to a 20,000-ton tanker compared to her prior capacity of 16, 515 tons. The refit gave her a life expectancy of an additional 15 years. Her length was increased to 372 feet from a prior 323 feet. The draft of the ship was unchanged.

Building the two sections of these two tankers is just another example of the many things the shipyard in Orange was capable of doing.

American Bridge had been Consolidated Shipbuilding during World War II and was the only shipyard in Texas to build warships during the war years. Other yards in Texas built auxiliary ships.

After the war, the yard was bought by U.S. Steel and became American Bridge.

During the remaining years, there was virtually nothing in the field of fabrication that the yard could not build.  From bridge girders to missile silos to large diameter pipe, the yard could do it all.