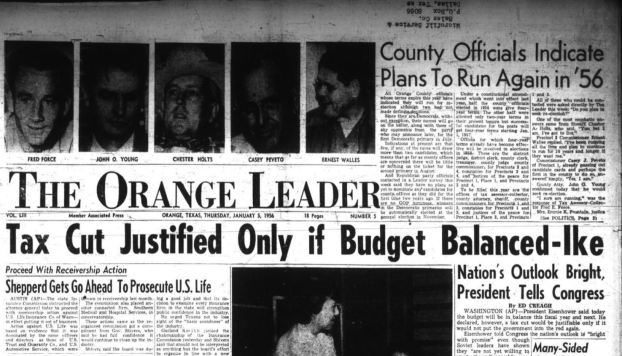 Ike states he will only support a tax cut if there is a balanced budget.

All Orange County officials up for reelection have filed to run. The Orange Fire Department made 41 runs in December,

The US Navy has announced that it is increasing berthing space in Orange. The Piggly Wiggly on 16th and Park is offering their sliced bacon for 39 cents a pound and chuck roast for 34 cents a pound

And, catch Kirk Douglas in the harrowing adventure, “The Indian Fighter” at The Strand; The Royal is showing Frank Lovejoy in “Mad at the World;” and at the MacArthur Drive in catch Rory Calhoun and Peggie Castle in “The Yellow Tomahawk.”

Ike is sending a bill to Congress that will stabilize farms by disposing of current surpluses and prevent future oversupply.... read more