And Now You Know: The billboards that inspired a movie 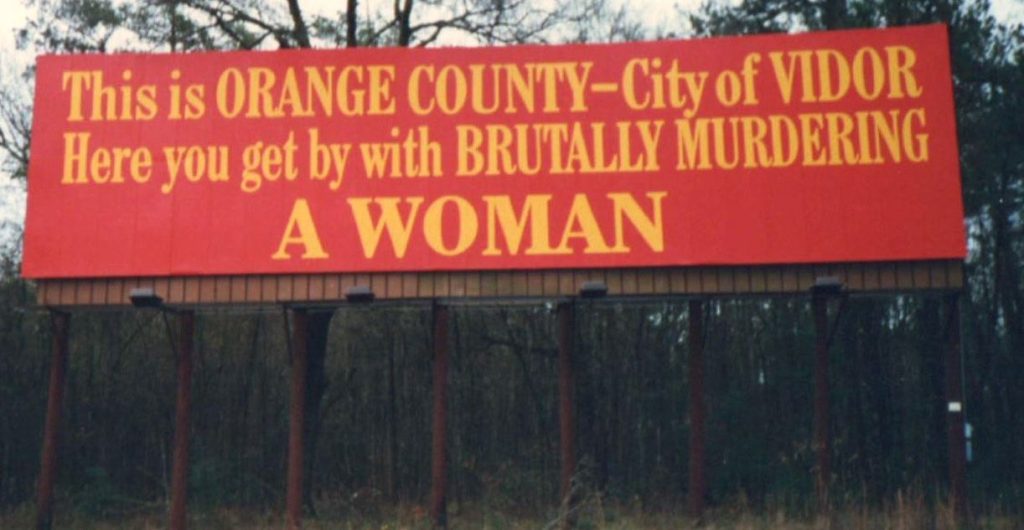 Irish writer and director Martin McDonagh was traveling through Texas on a Greyhound bus nearly 20 years ago. Traveling west through Vidor, Texas, leaving Rose City, he saw billboards about the murder of a young lady named Kathy Page. The message on the billboards left an indelible impression on him.

The billboards were the creation of Page’s father, James Fulton. The haunting message came from Fulton’s frustration about the murder of his daughter not being solved.

Kathy Page’s body was found in her car which had been driven off of a street in Vidor. The car was front end down in a large drainage ditch.

She had been strangled and it appeared that she had been raped. Her body was partially dressed. The police said they believed that the body had been placed in the car after she died. Police said they had a “Person of Interest.” Fulton believes that the person who raped and murdered his daughter was her ex-husband, Steve Page. The police did not totally agree.

As time went on and no progress was made, Fulton became more frustrated and angered. He appeared before the Vidor City Council on December 19, 1991, wanting to talk to the council about “the botched investigation of murder.” He was not on the agenda, so he was not allowed to address the council.

His frustration led to him placing billboards on Interstate 10 entering and leaving Vidor.

The billboards said a person could get away with murder in Vidor, Texas, he believed the Vidor Police Department took a bribe, and hauntingly included the phrase, “Raped While Dying”.

McDonagh could not get the billboards and the phrase about her being raped out of his mind.

Eventually, he began to get the idea of writing a movie script about a similar situation.

The story he wrote became the movie “Three Billboards Outside Ebbing, Missouri.”

“It was this raging, painful message calling out the cops about a crime,” McDonagh said. “The title of the film came from the concept and the concept came from that image which stayed in my mind for years. What kind of pain would lead someone to do that? It takes a lot of guts—and anger.”

In the movie, Frances McDormand plays a grieving mother who rents three billboards to shame police into solving her daughter’s rape and murder.

The movie ends with the murder unsolved, like the murder of Kathy Page.

Fulton has not eased off. He has boxes of files that contain evidence, to him, that the police have not paid attention to.

Fulton and his wife filed a civil suit against Steve Page in April 1992. The case did not go to trial until October 15, 1999.

Steve Page was found guilty in that trial.

Civil trials do not require the same evidence of guilt as criminal trials. Fulton’s reason for filing the civil suit was to keep Steve Page from collecting the life insurance due from the death of Kathy Page.

Fulton is in his late 80s. Putting up the billboards and filing the civil suit has cost him over $200,000. He vows that as long as he lives, he will still make every effort to find his daughter’s killer.

Rod Carrol is the 5th police chief in Vidor since the murder. He says the case is ongoing, it is not a cold case, and they are still evaluating evidence and have a “person of interest” in the case.

There is only one billboard on the interstate today.

James Fulton is a man with a deep love for his daughter, full of anger that her murder is unsolved.

In last week’s “And now you know” column Mike Louviere wrote that Steve Page had been found innocent in a criminal trial for the murder of his ex-wife, Kathy Page. That is not the case.

One of the sources Louviere used made a comment about a criminal trial.

When the story was posted on social media, one of James Fulton’s daughters sent Louviere a message and told him that there was no criminal trial.

The truth is that the Orange County District Attorney has not felt that he has enough evidence to build a case against Steve Page. Therefore, there have been no criminal charges filed on Page.

Louviere would like to thank Sherry Valentine, Mr. Fulton’s daughter and Kathy Page’s sister for making the effort to let him know about the mistake.

We apologize for any inconvenience this may have caused.